Just four more days and the 8th annual Thanksgiving Hoo Ha will be here! Thirty or so family and friends will be here this year. We love hosting this family reunion. I know not everyone feels as relaxed as I am when it comes to having large gatherings at their house.

Last year a friend was having 20 over for the big day and she was in a panic. Weeks beforehand, she was experiencing some anxiety wondering what to feed them, how to entertain them and what about all the chaos and noise?

I was in the grocery store this past Friday shopping for that night’s dinner. When I got to the end of the store, a friend walked up. It was then that I said out loud that I should perhaps go ahead and get my Thanksgiving shopping done now too. I just knew that the store would be jammed with shoppers over the weekend, so while it was relatively quiet, I’d get what I needed to feed the crowd. This friend asked how many I was having over. “Thirty or so”, I answered. She looked at me with her eyes widened and asked, “You haven’t bought your food yet?” Me- “Nope. But now seems like a good time.” My friend walked away completely aghast and offered a quick “Good Luck” over her shoulder.

She made me laugh. I still had over a week to prepare! I don’t know. I guess when you’ve hosted this many people for this many years, you just kind of know what you’re doing. The house is clean. Counters have been cleared off. I’m cooking up the same menu. And the bocci ball set is ready to go! I haven’t changed a thing. Some might call me lazy for not creating something new, but I like to call it tradition. 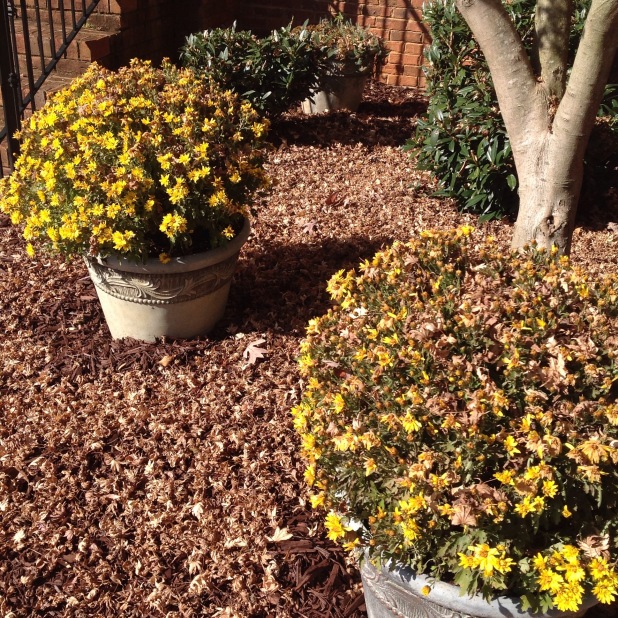 I tried jazzing up the outside of my house with flowers, but with a couple of days of freezing temperatures, then yesterday it poured down rain all.day.long. Needless to say, my flowers look a little frazzled. Am I going to freak out and replant? Nope. It is what it is. 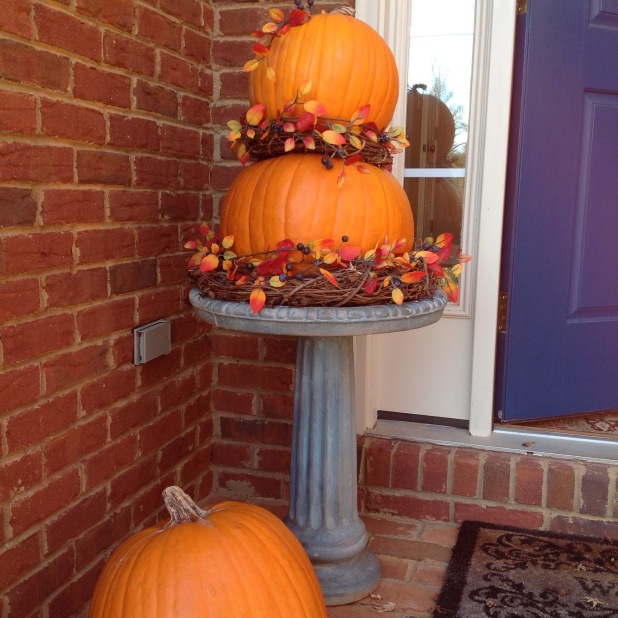 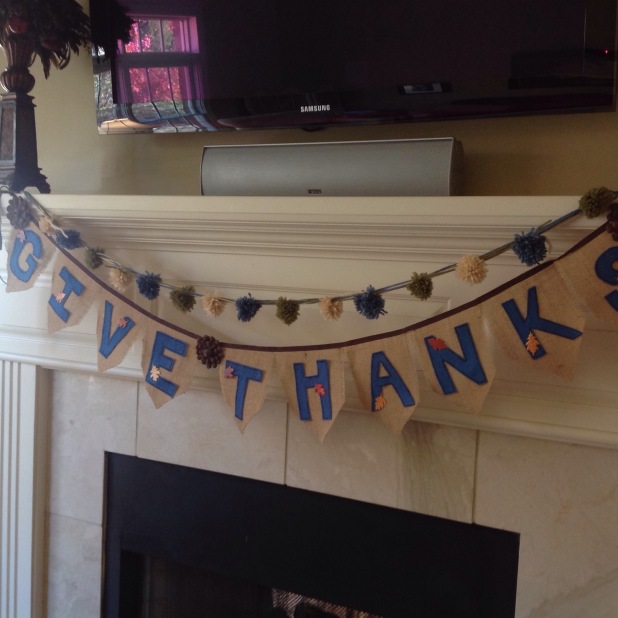 I’ve kept the decorating simple. This is the same banner I made last year. 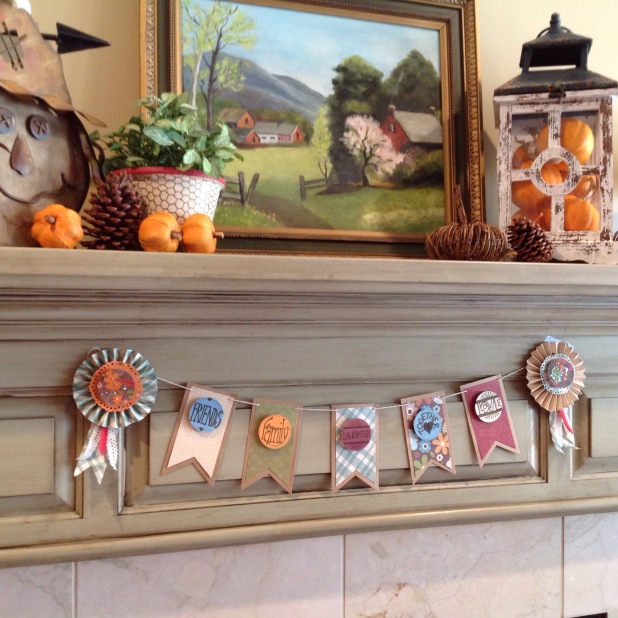 A couple of days ago I needed to get crafty. There are some days when I just have to do it! I made this cute little swag. 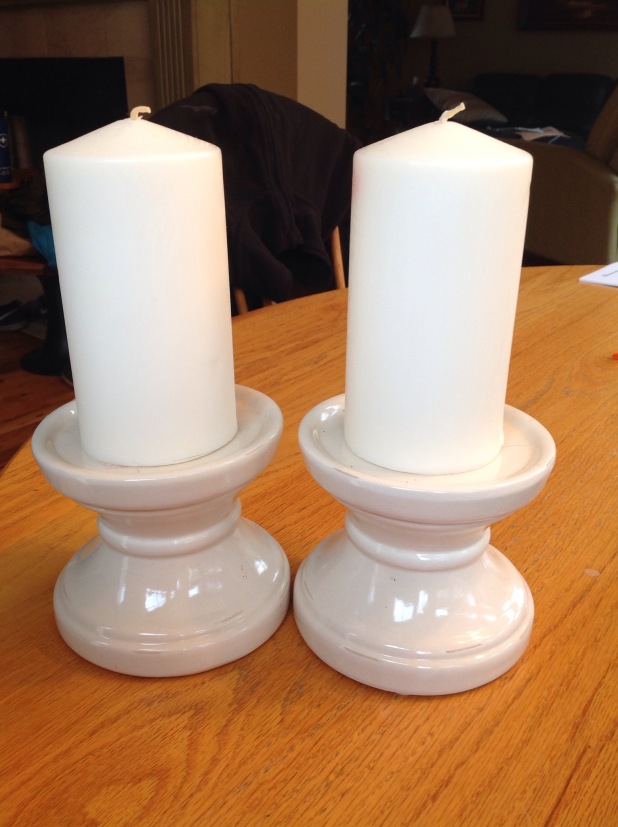 My dining room was looking a little sad. I didn’t want to buy anything new, so I just used what I had. But these candles looked even sadder! 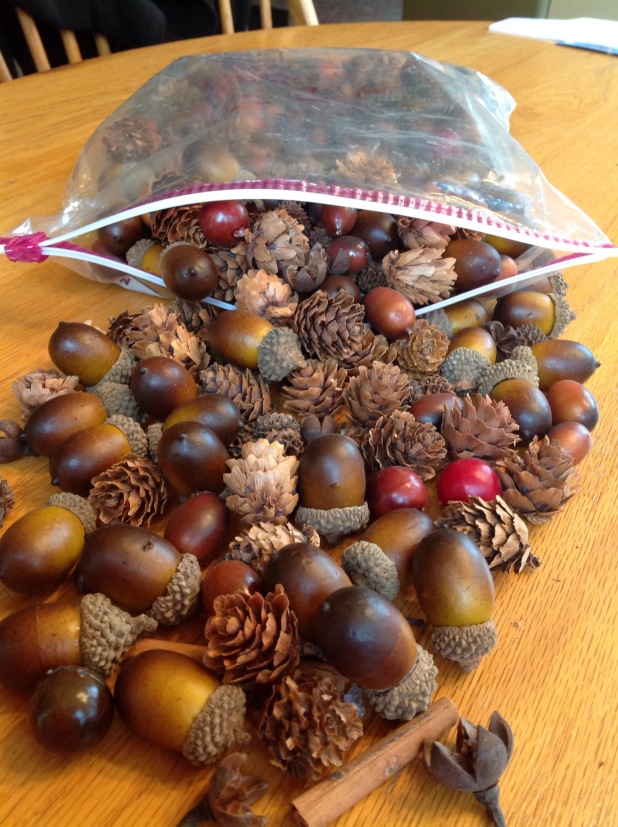 I found this bag of pinecones and acorns in my cabinet. 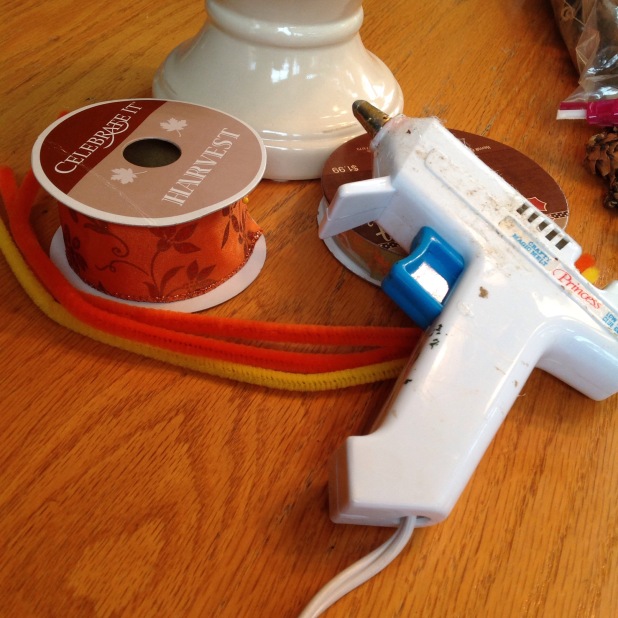 Hot glue gun and pipe cleaners, I knew I could do something. 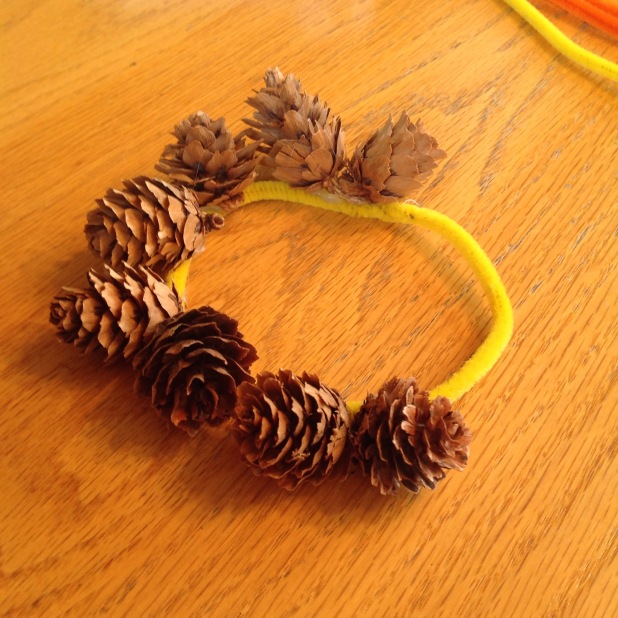 After measuring around the candle, I started hot gluing the pinecones and acorns on the pipe cleaner. 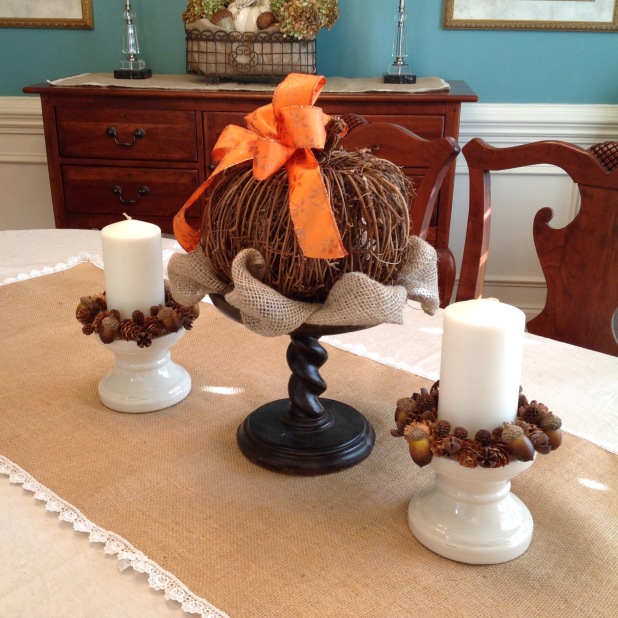 Yup! That will do.

Over the years, I’ve learned to keep the important things important. A perfectly clean house? Not important. With 30 or more people walking through and hanging out…it will get messy. There will be glasses and plates scattered about. There will be spills and accidents. Everything is cleanable. No need to worry. Just have the paper towels and spray cleaner handy.

The most pin-worthy decorating? Not important. The cutsie stuff is nice to set the mood, but it isn’t what makes the memories. Turn off the tv. Play games, talk, hike, get moving! These are the things that make memories.

Cooking up a gourmet meal? Not important. Let’s get real. With lots of people, lots of ages and lots of tastes, you just have to go with what the majority likes. Who doesn’t like sweet potato casserole with marshmallows? Is it the most healthy-diet friendly-sugar free-gluten free-paleo dish? Nope. But if you are not in danger of being taken to the ER because you had a spoonful, Go For It! It is one meal. Enjoy it. Go for a walk after the dishes are done.

Don’t have the huge farmhouse table that seats 20 outside? Neither do I. I set up several tables all over the place. I encourage people to sit wherever- inside and outside. Maybe rent a table. I use a large painters cloth for my tablecloth. It works. You could cover the tables with brown Kraft paper. “Linens” don’t have to be pressed and matching. I think they are awfully pretty, but if I don’t have the energy to pull out the iron, it’s ok. That’s not important.

Finest Thanksgiving China from Williams-Sonoma? Not important. Let’s get super real here. There are plenty of pots, pans and casserole dishes to wash, without adding hand washing a bazillion china plates. Large, oval Chinet plates work great, because they are big enough and strong enough for a spoonful of all the offerings and you can throw them away. Personally, I would rather be outside playing Bocci Ball or throwing a frisbee than wasting time doing the dishes.

What are the most important things?
1. Family and friends are gathered in love, laughter and grace.
2. Food is shared.
3. Memories are made by doing something together.

We don’t know what tomorrow will bring. Enjoy today. Make some happy some memories.

Superman, Thomas and I were eating at Panera after a cross country meet when Superman’s phone began to ring. Tyler’s name appeared on the screen. My eyes lit up. Superman answered and after a few “Uh Huh’s” and “Let Me talk to Mary”, he hung up to say that Tyler wanted to come up to Spartanburg to talk to us and Mary Claire is not to know about it.

WOO HOO! I was jumping up and down inside. I got that funny excited feeling.

“Now Mary. Don’t be jumping to conclusions. We have no idea what he wants to talk to us about.”

Superman was in serious denial that his baby girl is growing up.

So two days later Tyler showed up. Thomas suggested a good guy meal of roast, mashed potatoes and gravy, green beans and banana pudding for dessert. After filling our bellies with food and a couple of hours of small talk, Tyler got down to business. 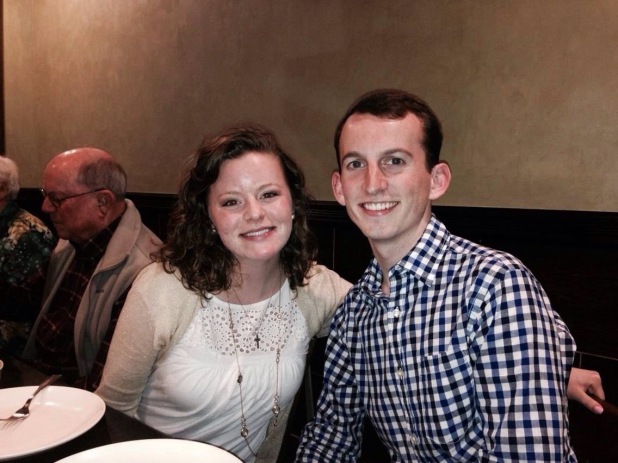 Tyler told us about the first time he met Mary Claire. He had just begun attending church at Awaken and was greeting people as they arrived. When up walks a curly haired, spirited, smiling, young college student, named Mary Claire. When asked about her plans with college and after graduation, she replied that she just wants the unreached to know about the love of Jesus Christ. Tyler says he knew, immediately, that he had to get to know her. He spoke of all the ways she makes him a better man. He’s been willing to do whatever it takes to show her the respect she deserves as a daughter of Christ and to love her as one ought to be loved. Superman, of course, asked about his financial situation and future plans, all the while shining his 18-gauge shotgun. (Naw…just kidding about the financial stuff.) 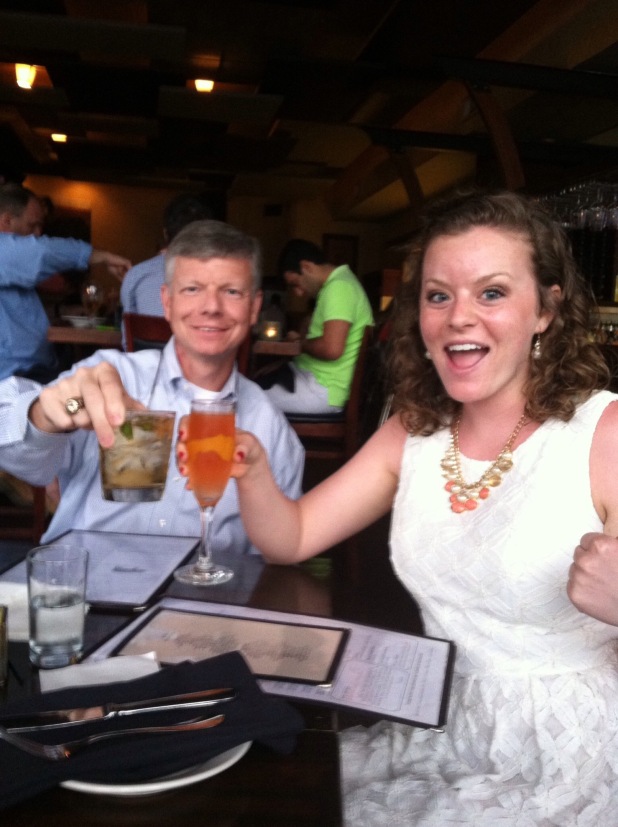 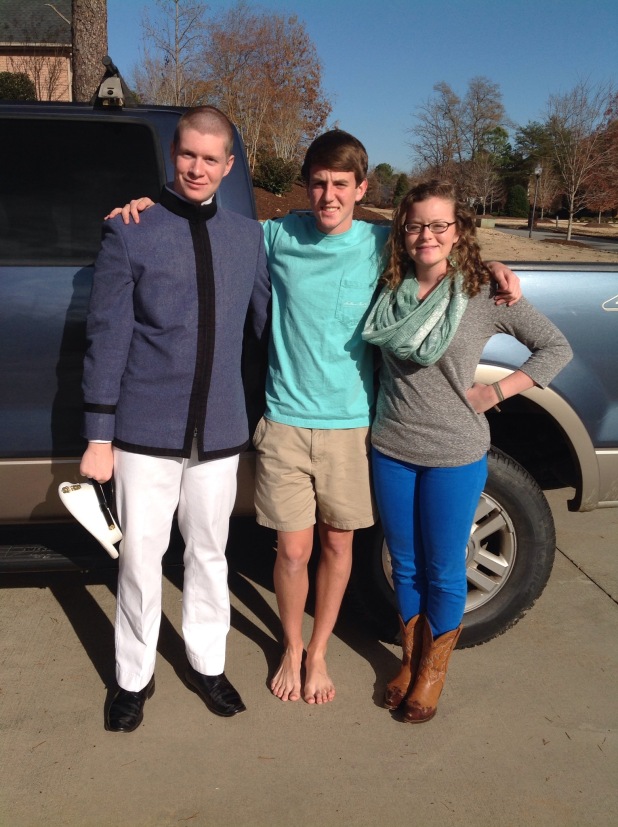 Her two brothers are quite protective. She had “dated” a few young men that didn’t meet up with her brother’s approval, so they let her know it . It was annoying to her, but I think she realizes now, that it was because they just love her so much and want only the best for her.

So now Tyler arrives on the scene. Adam was the first to meet him. Not only did Tyler get high marks from Adam, but he was also anointed with a nickname..T-Money. (In our family, your nickname does not have to have any rhyme or reason. Mary Claire had given Adam the name “Little Petey” when he was really little. We all called him Petey or Pete, for years. No reason. Just did.) Needless to say Tyler knew he had gained some points by having a nickname. Adam liked him a lot and Thomas gave him two thumbs up. 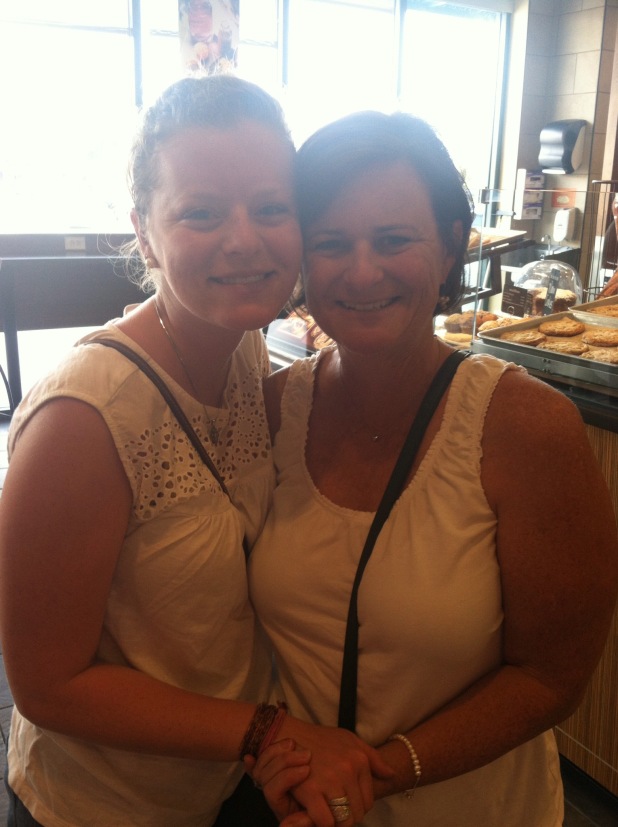 We ended the evening with a resounding YES! to Tyler’s request for our blessing, but now I was going to have to keep it under wraps until he actually asked her to marry him! OMG! You know me…I am a blabber mouth, plain and simple. I have to tell the whole world, especially when I am sooo excited! To really put me to the test, Mary Claire had planned to come home for a few days. So two days later, MC shows up and I have to act like nothing is going on. Needless to say, between the time Tyler had called about coming up and when MC arrived, 5 days, I had already told half of Spartanburg County. But not Mary Claire! I was feeling quite proud of myself. Her first morning home, we were in our pajamas drinking coffee and she was telling me all about her horrible night when she thought Tyler was going to dump her. (She had just had a rough day at work, feeling tired and hormonal.) She went to his house and he wasn’t there! (No, because he was at our house asking for your hand in marriage!) I had to sit there with a straight face and be all understanding, when the whole time I wanted to jump up and down and squeal with delight! People! I was dying!

When my bible study girls came over, we waited until Claire went out for a run before I told them about Tyler’s visit. Then when she returned, we got all quiet and giggly. When Mary Claire and I were in the car doing errands, my friend Margo called. I answered on the speakerphone in the car. Near the end of our conversation, I got this dreadful feeling that Margo was about to say something about the impending engagement, that MC knows nothing about, so I interrupted Margo and said “You know what Margo? I’m here in the car on speakerphone with Mary Claire! We are about to go into Old Navy, can I call you back later?” Margo started sputtering. My big mouth almost got me in trouble a few times during Claire’s visit, but somehow she went back to Charleston clueless. 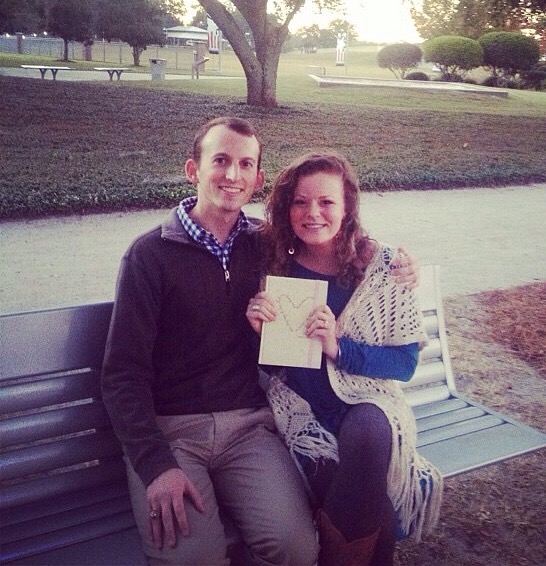 Finally. a few weeks later, Tyler took Mary Claire to Riverfront Park. He had created a journal book of the important moments in their courtship. Starting with the first time they met to this moment of him on one knee. 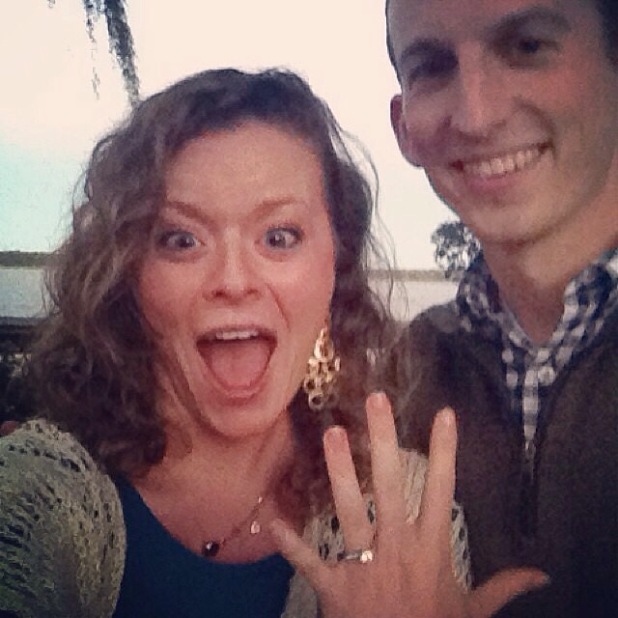 As a parent who has been praying for 22 years for my little girl’s future husband…my prayers have been abundantly answered! Tyler loves God. He is smart, wise, kind, funny, engaging, helpful, caring and loves Mary Claire more than anything. I couldn’t be more happy. Even old Superman has proudly told everyone that He truly respects Tyler.

Now that’s saying something.
Well, I guess we’ve got a wedding to plan for!