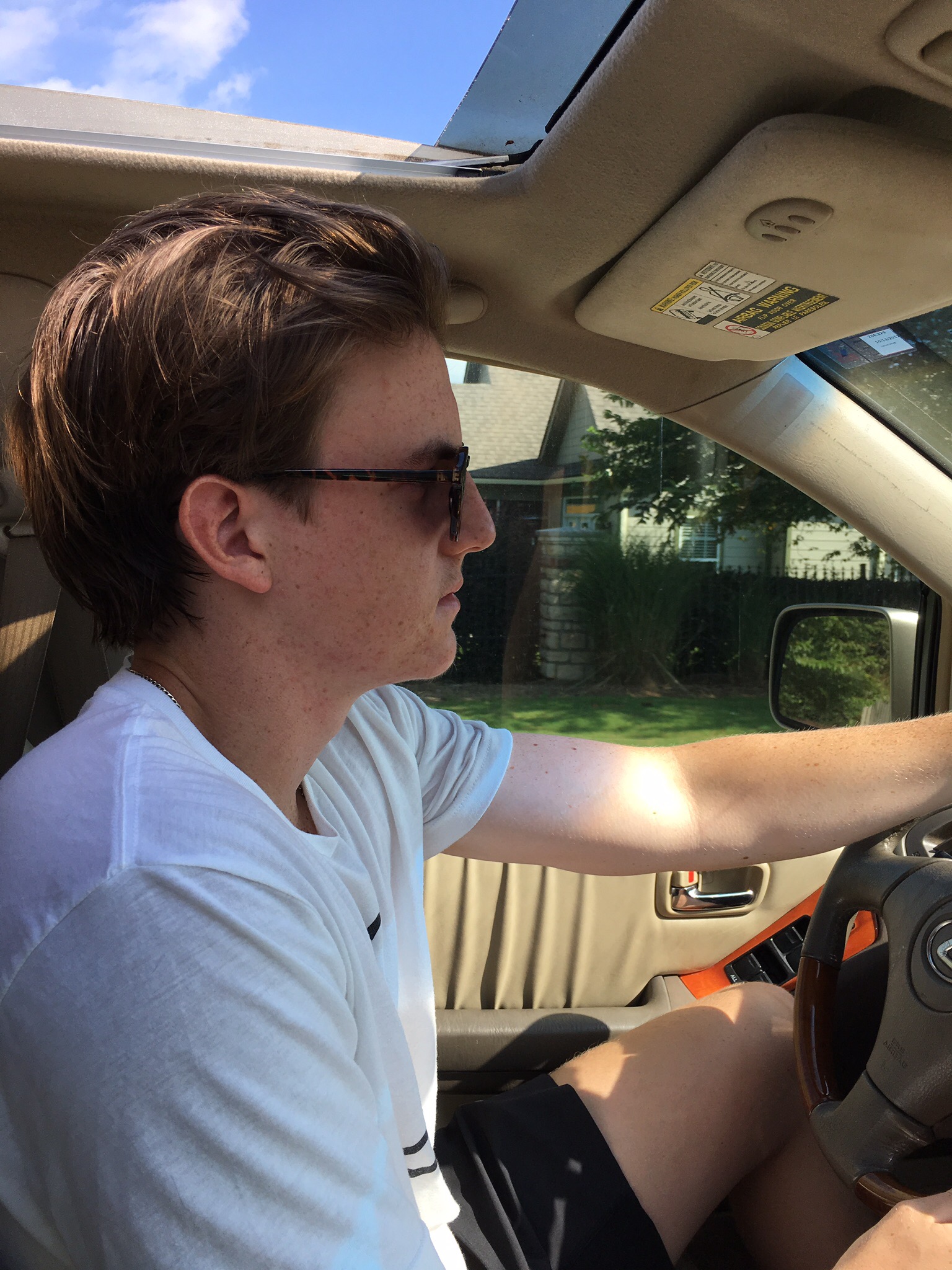 After seeing his brother’s quilt that I had made, he wanted one too. Thomas wanted fish to be his focus. 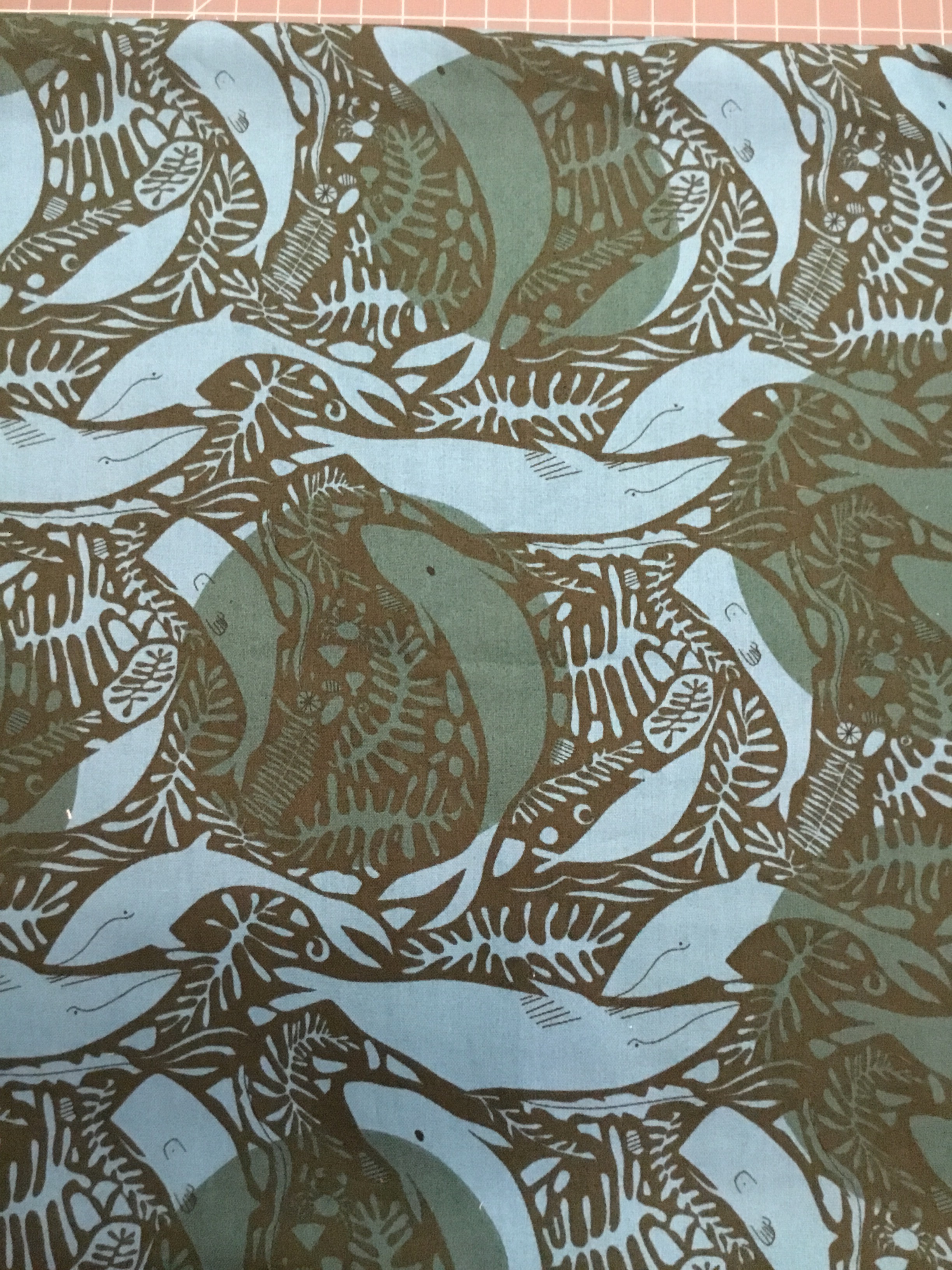 Finding fish fabric that isn’t childlike or doesn’t look like it came out of a hunting and fishing magazine is tough. But I felt like I lucked out when I visited Five Eighth Seams in Charleston. 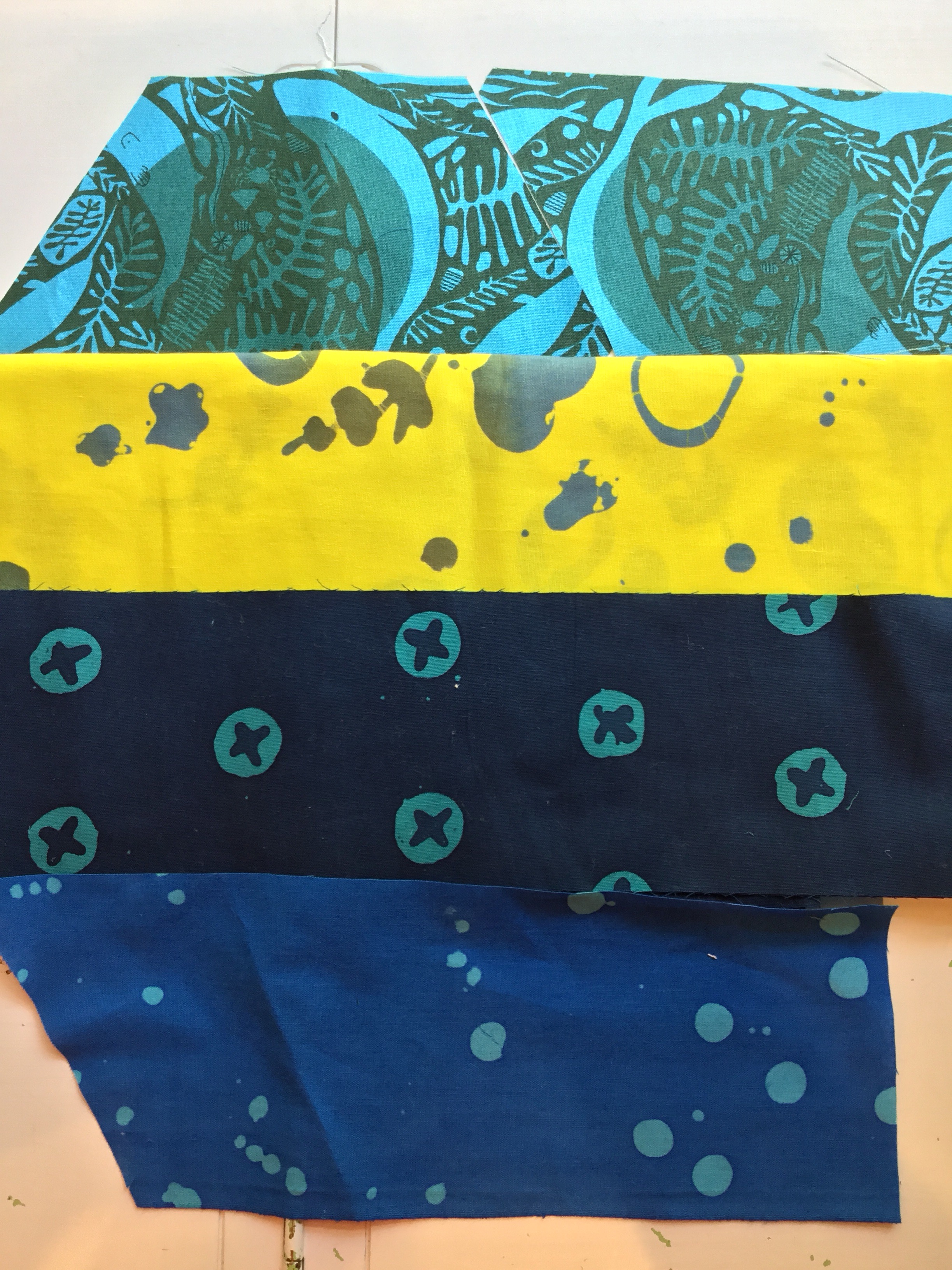 One of the gals there helped me pick out these four fabrics for the quilt. I showed Thomas, it he didn’t like the yellow. Bummer, I thought. Well maybe if he saw it all together, he’d see how the yellow will help make the quilt “pop”. 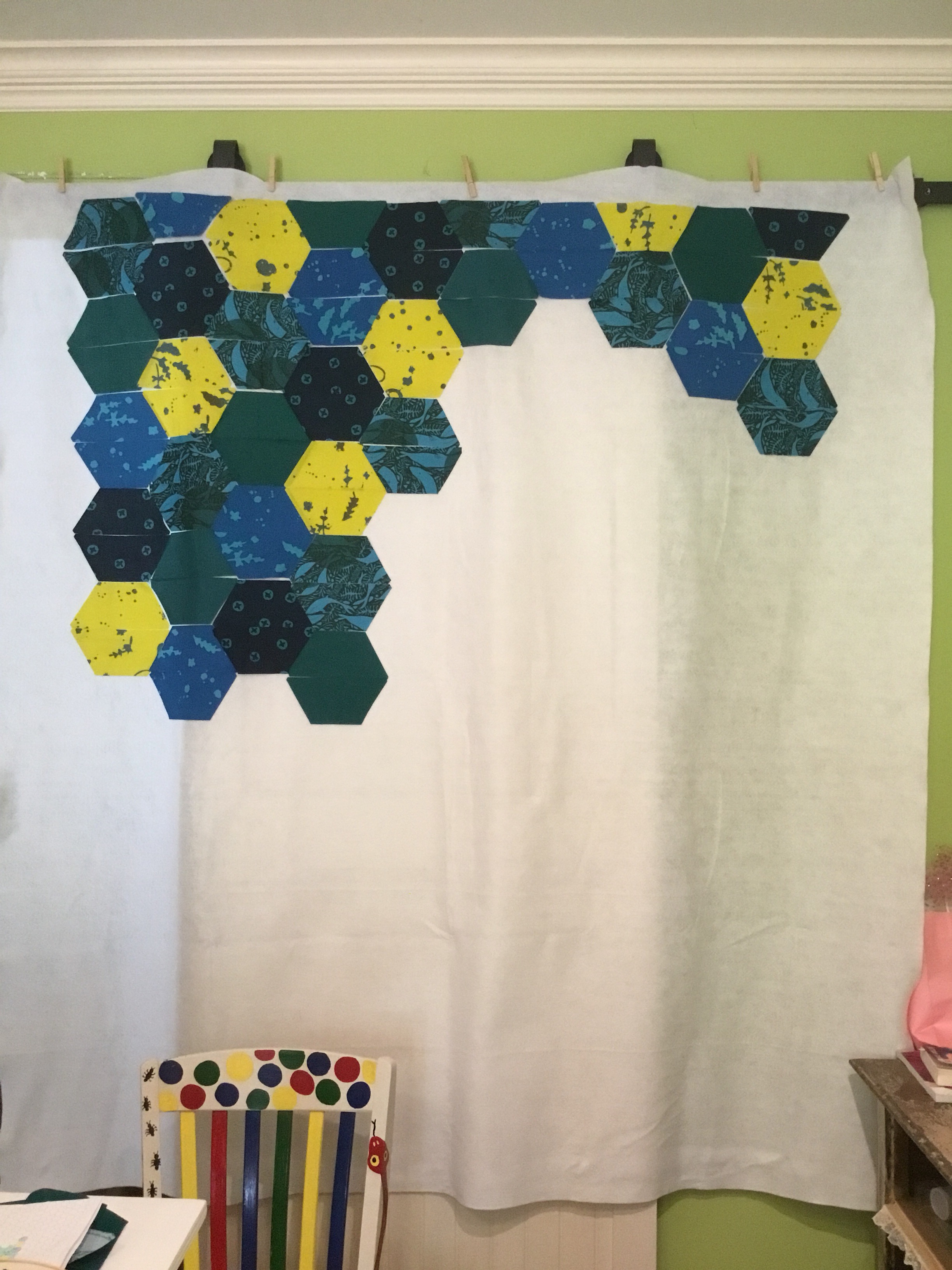 I decided on a large hexagon shape. I cut 200 half hexies in order to avoid sewing “Y” seams. 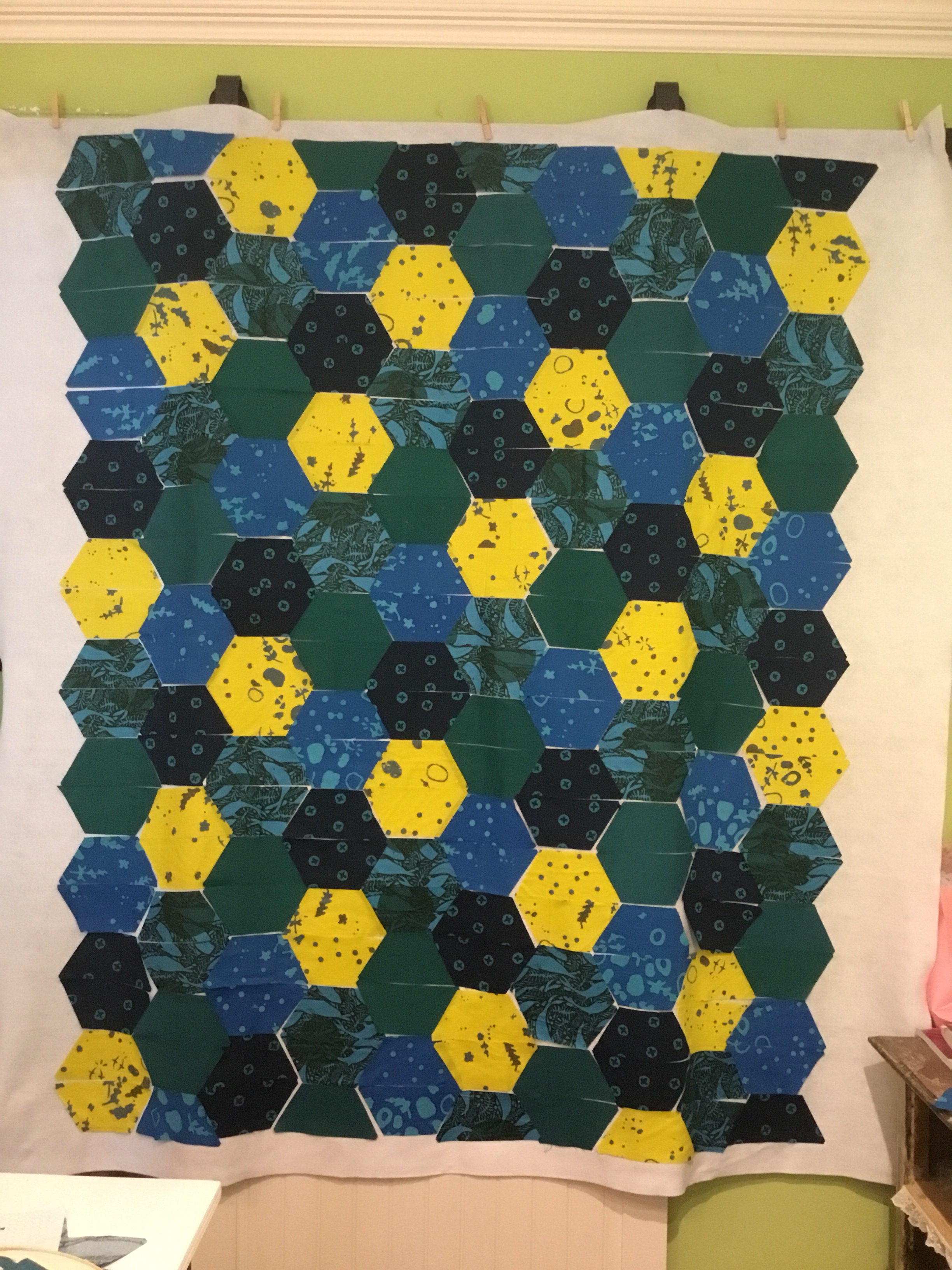 I played around with the color placement. I realized that with only the four original fabrics, it was not going to work, so I bought the solid green. Thomas still didn’t like the yellow. 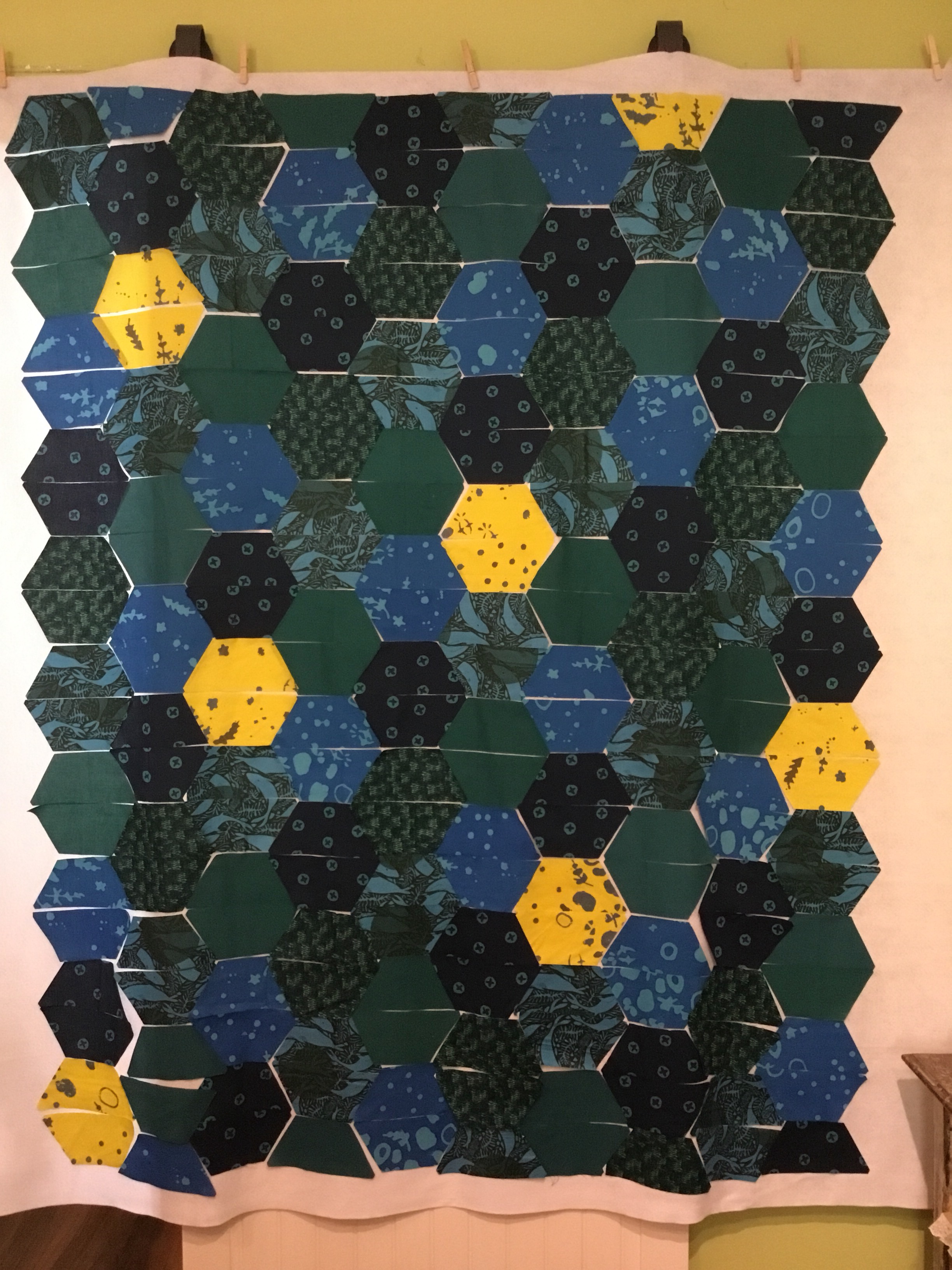 Aargh! Ok. Maybe that was too much yellow. What if there were only a few spots of it? Well, if I take out even a few yellow hexagons, I’ll need to replace it with another fabric. So I bought some fabric that looked like it had fish scales on it. This is it. 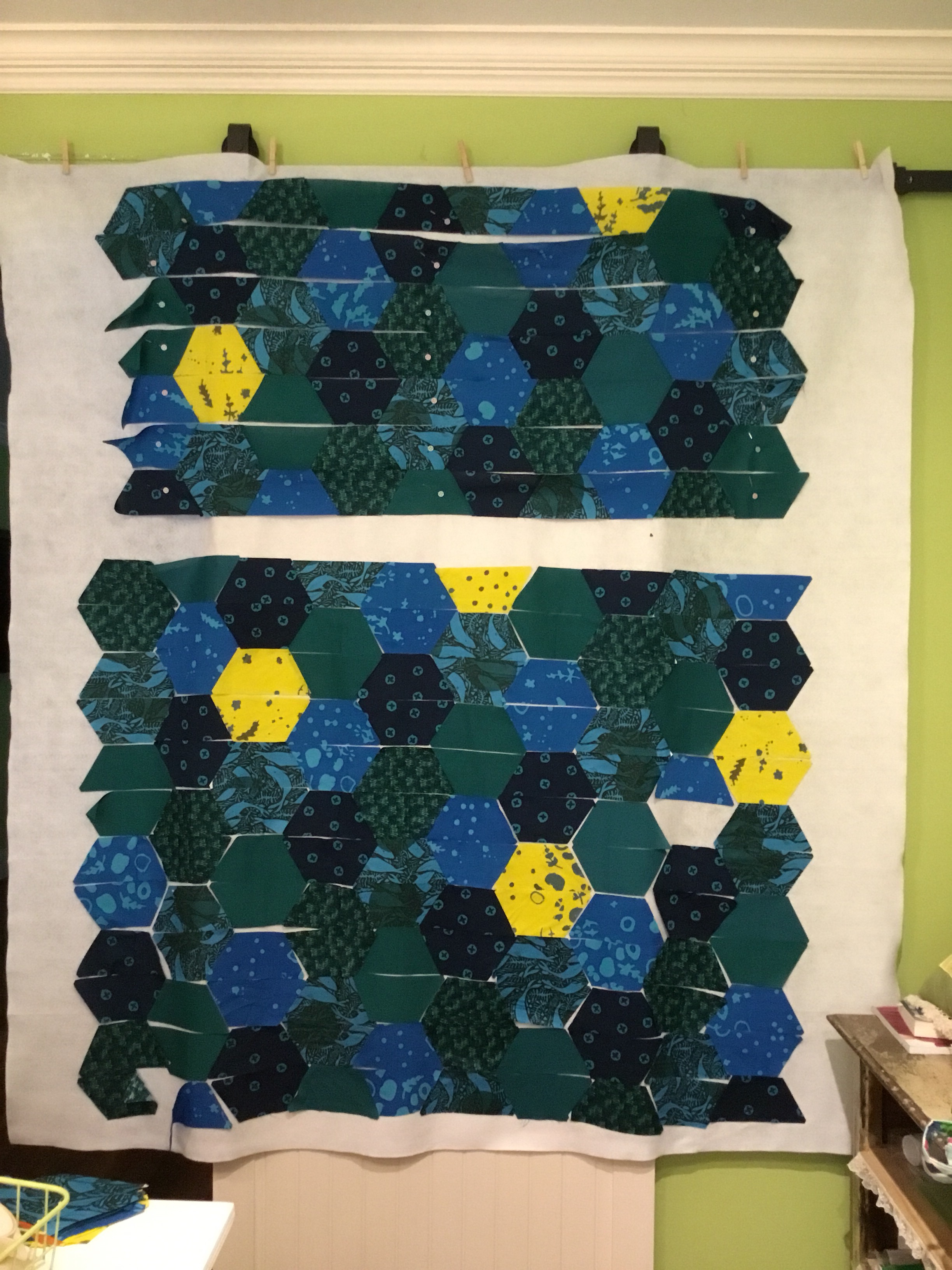 I started sewing row after row, each half hexie to the next. Thomas came home one afternoon as I was working on the quilt. I was about half way through sewing the rows, when he kindly said “Mom, I love everything about this quilt, except the yellow.” 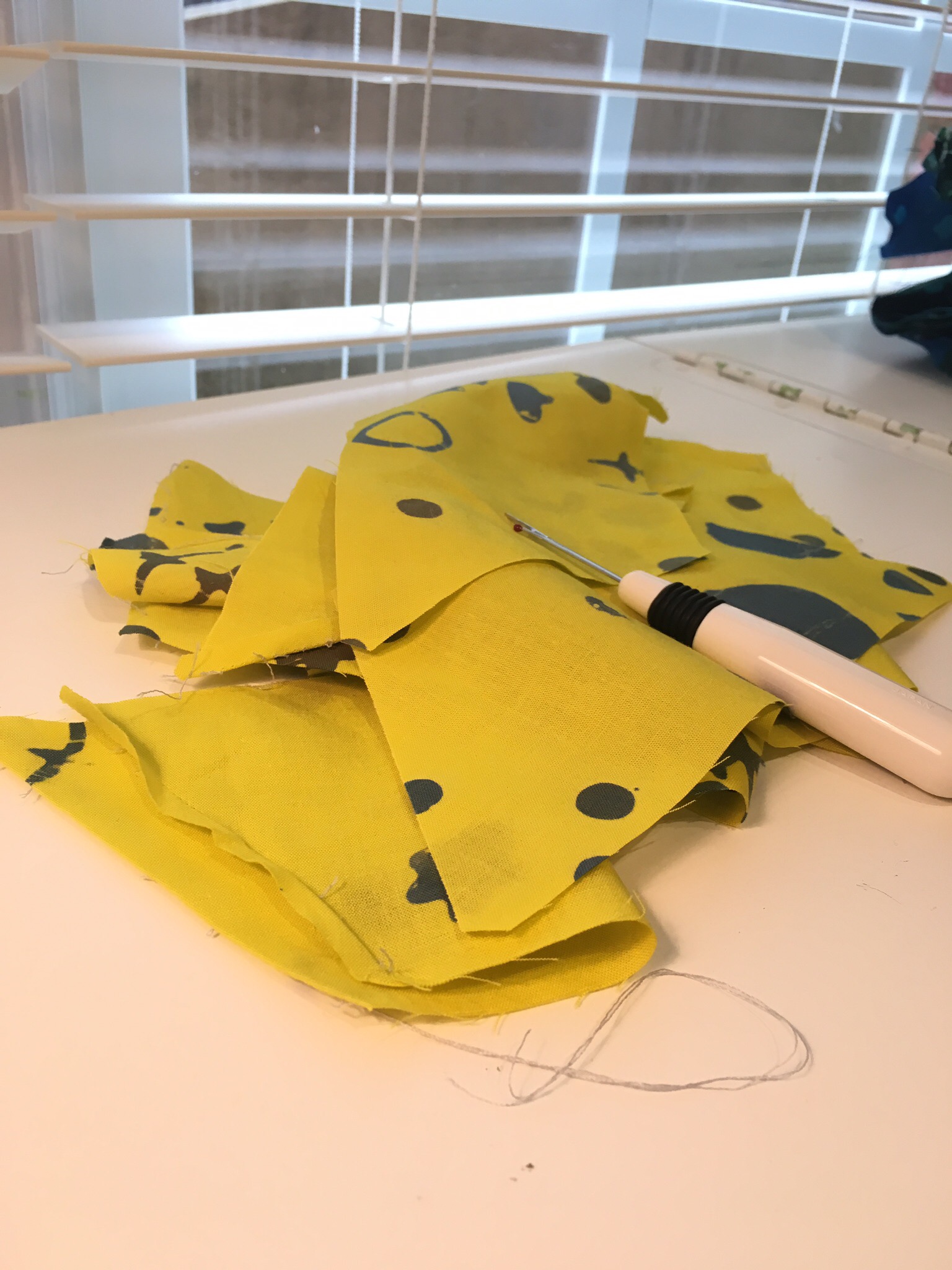 I grabbed my seam ripper and took out all the yellow. 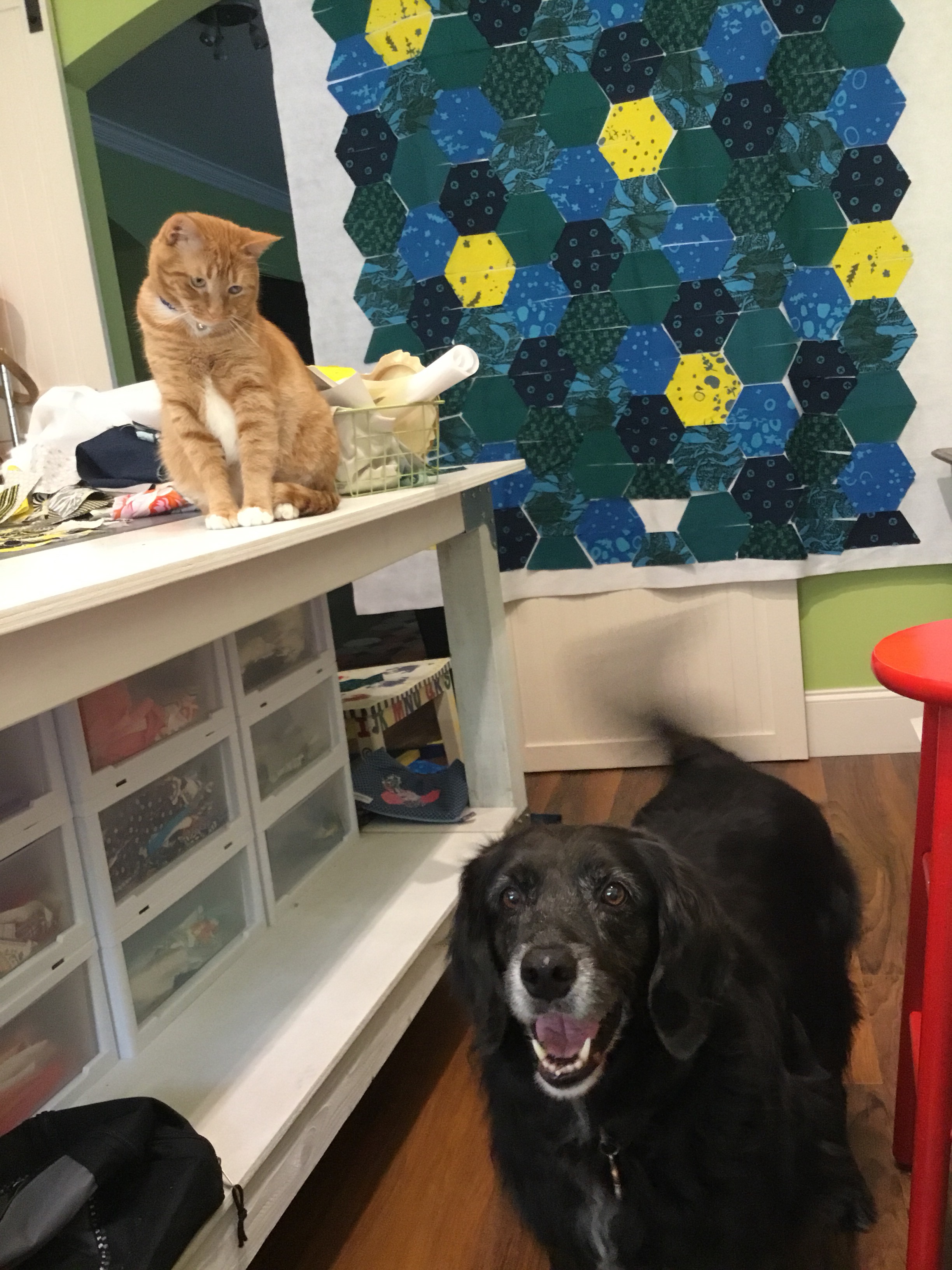 These two of course wanted to help. Unfortunately, Sam’s happy tail knocked the bottom two rows off the wall. 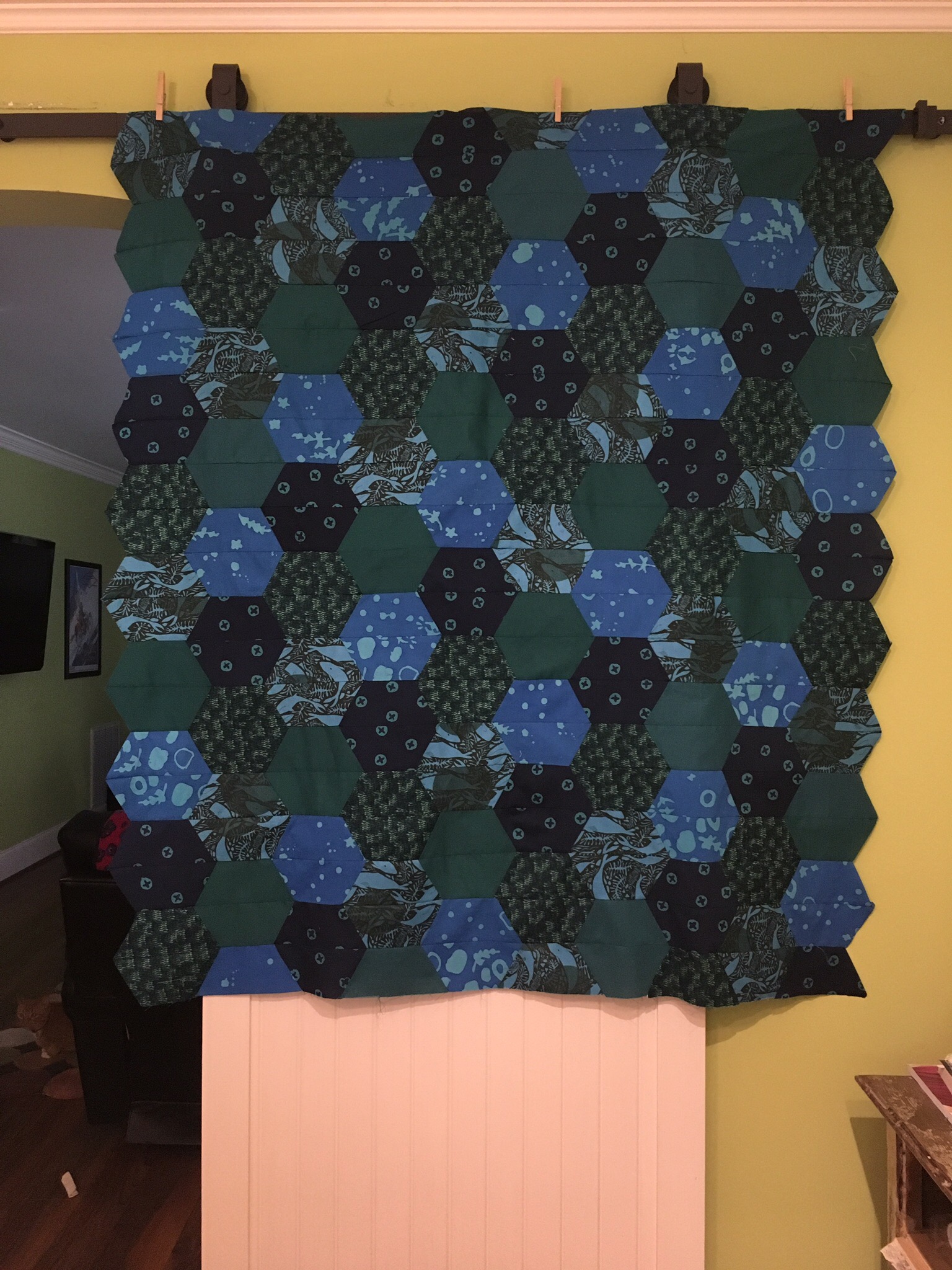 After sewing each of the rows together, I knew it wouldn’t be long enough, so had to sew more half hexies together to make . 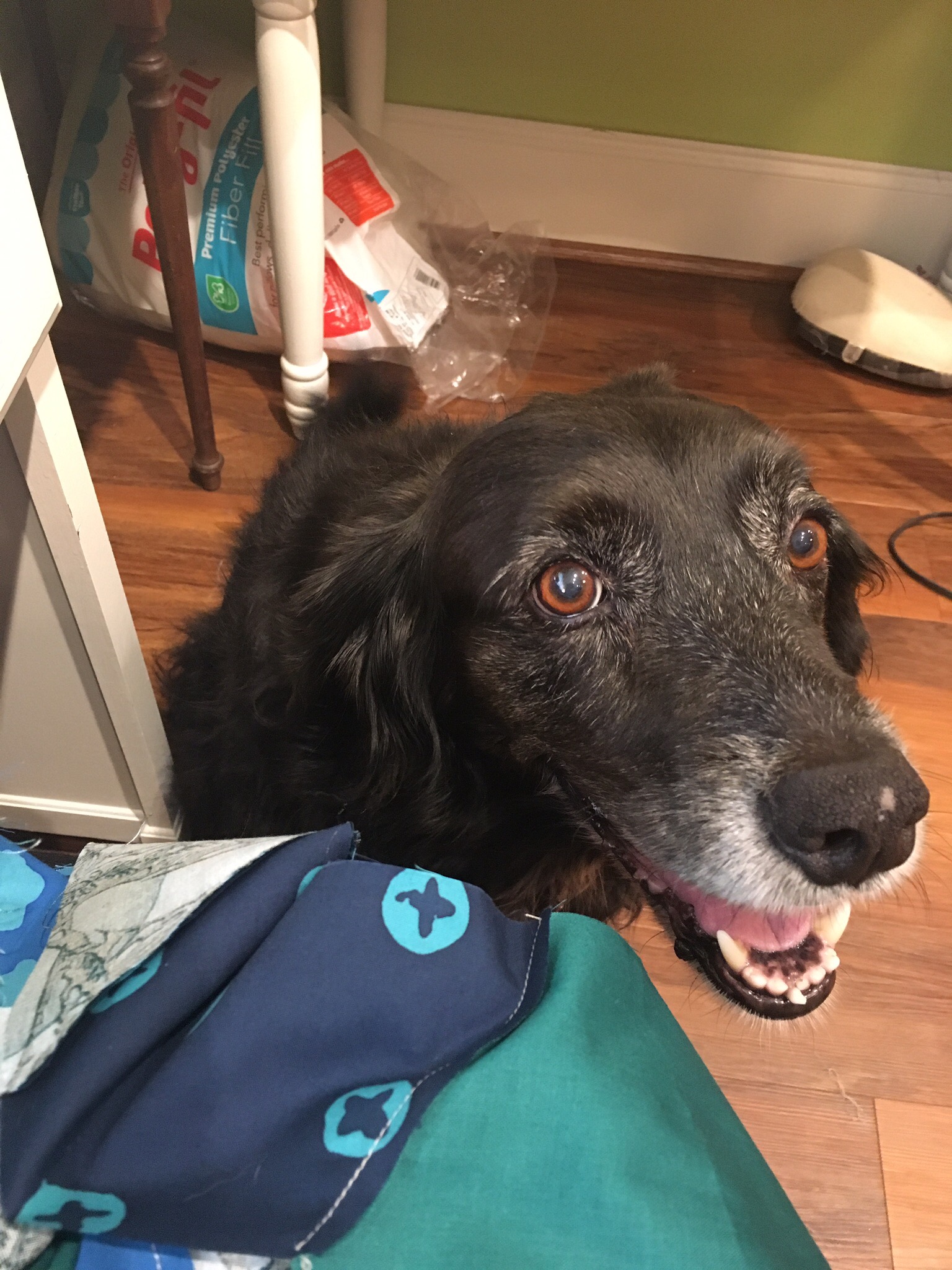 I had lots of encouragement to continue on. 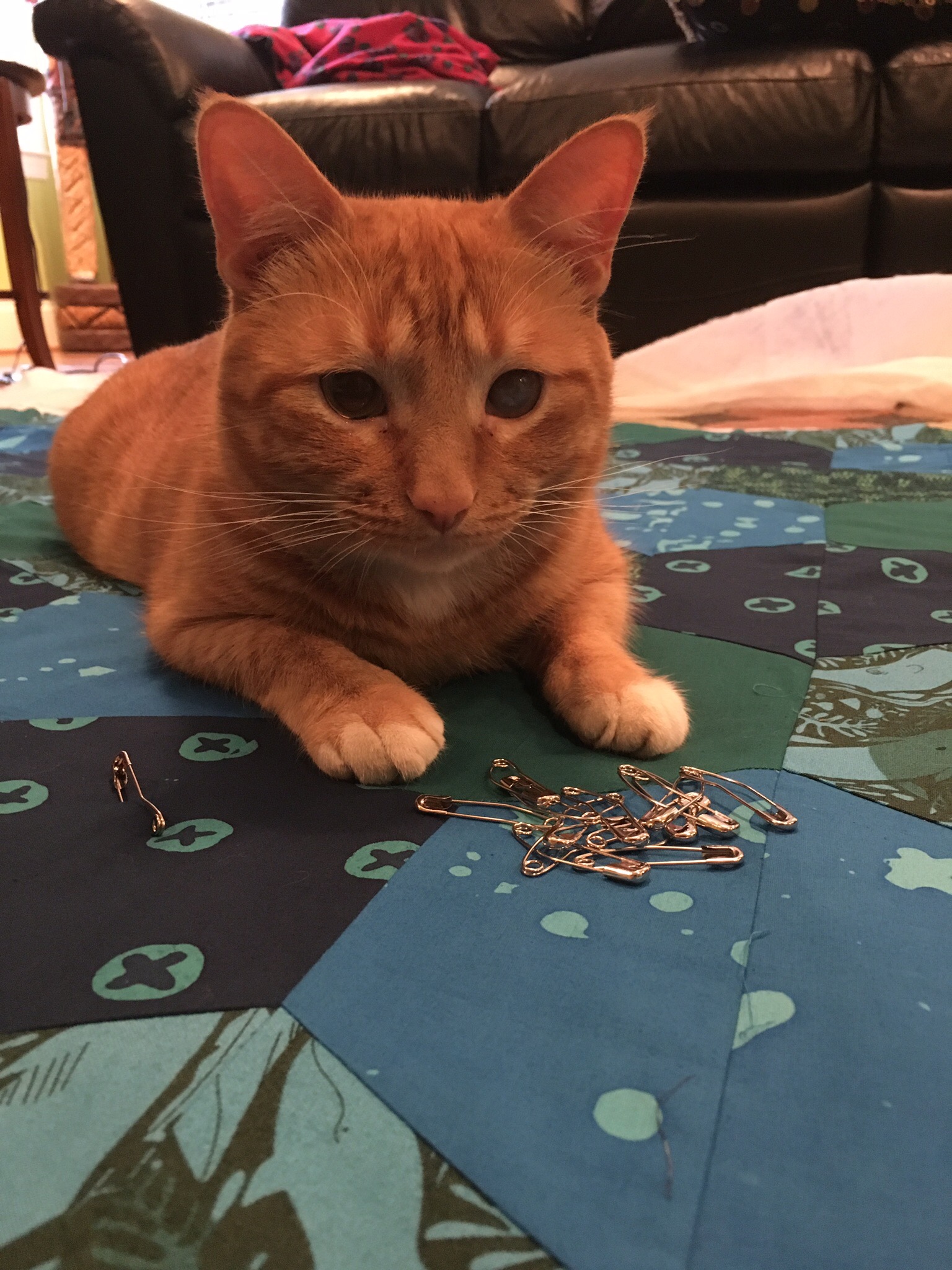 When it came time to pin the layers together, Coconut was there to supervise. 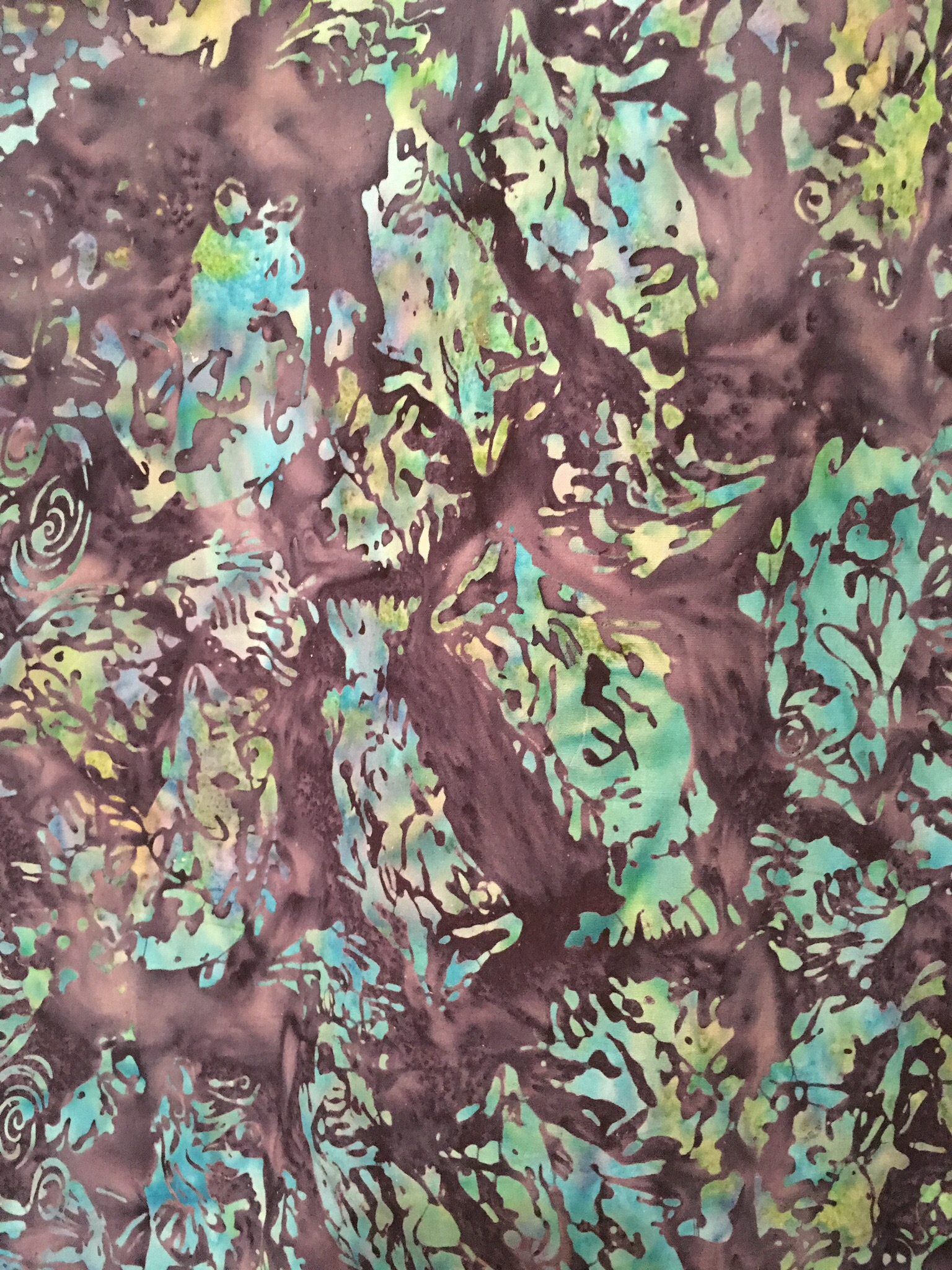 For the backing fabric, I used this bass fish. If you look closely, you can see the bass with his mouth wide open. 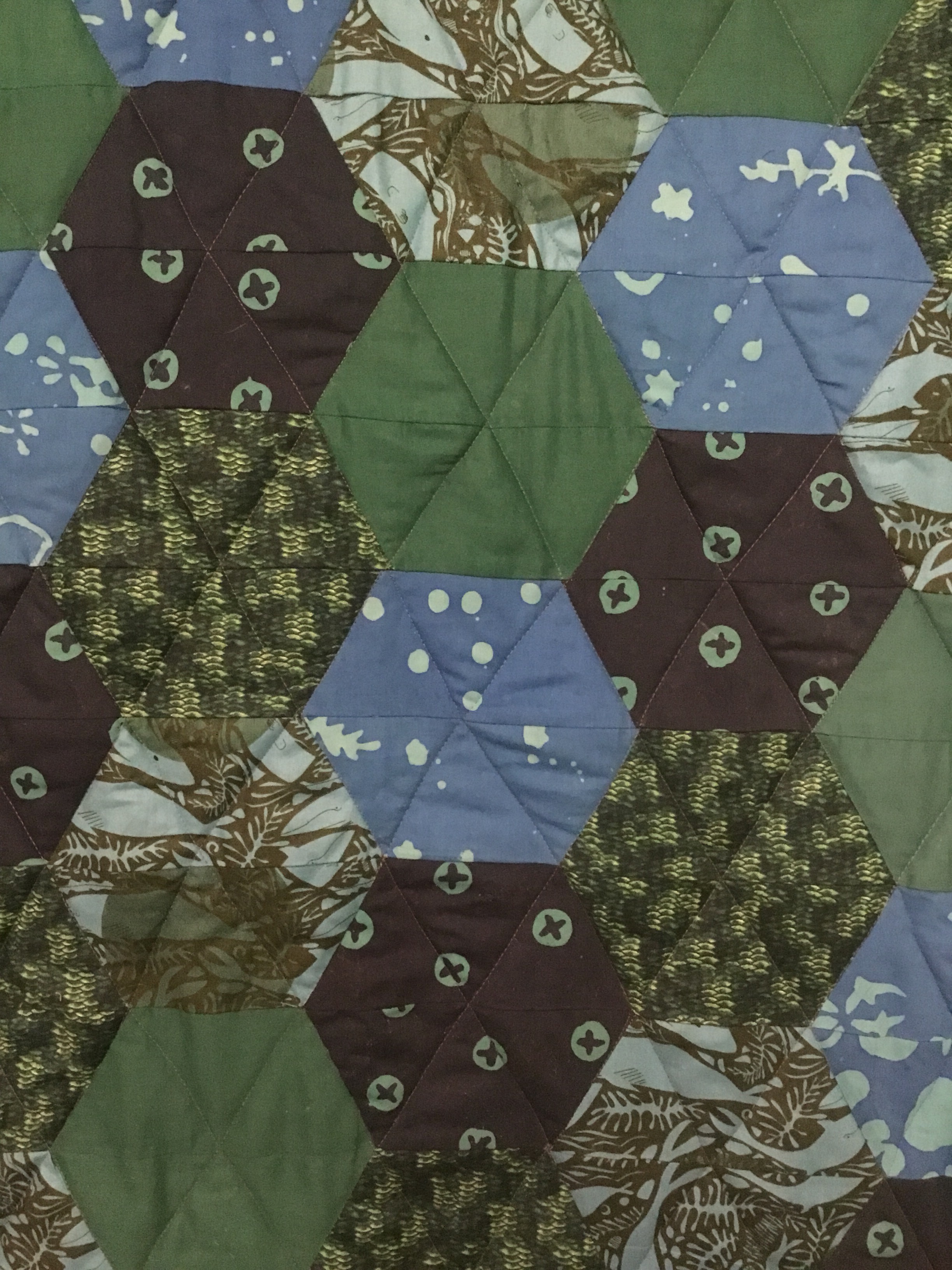 I chose to do an easy, straight line quilting. I just went from one corner to the next. Easy Peasy. 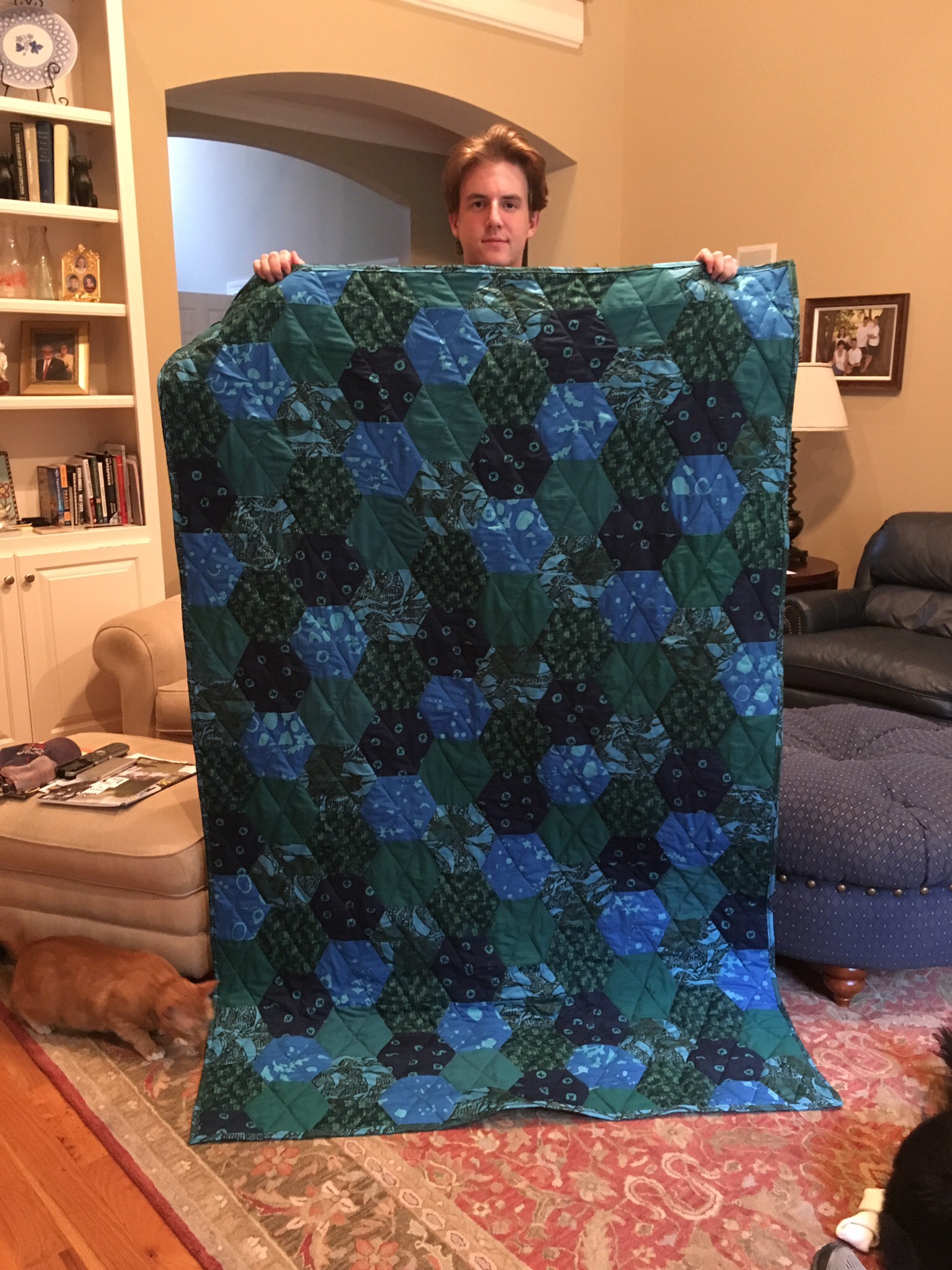 Here is the front…. 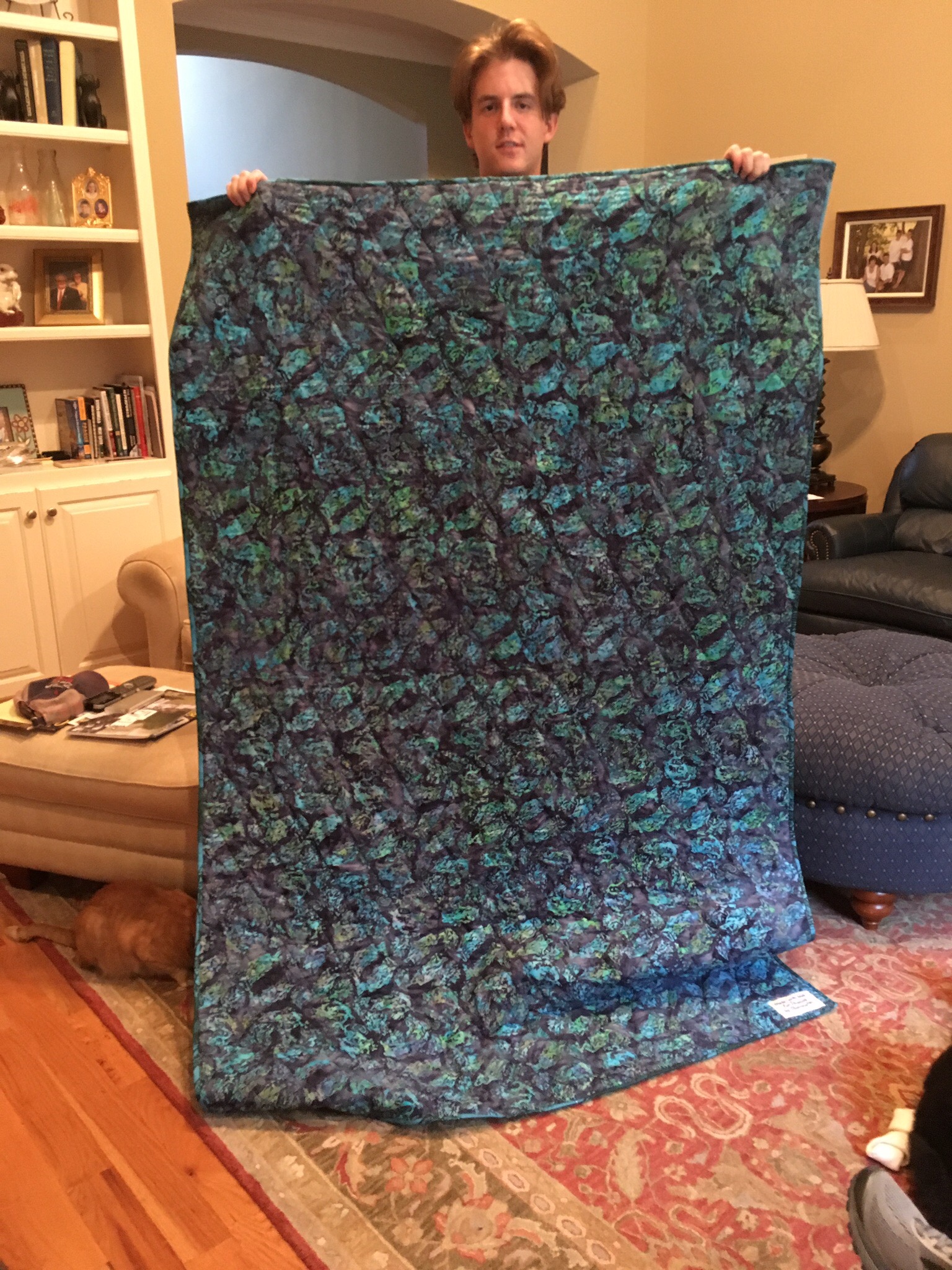 And here is the back! All Thomas approved. And not a spot of yellow in sight. 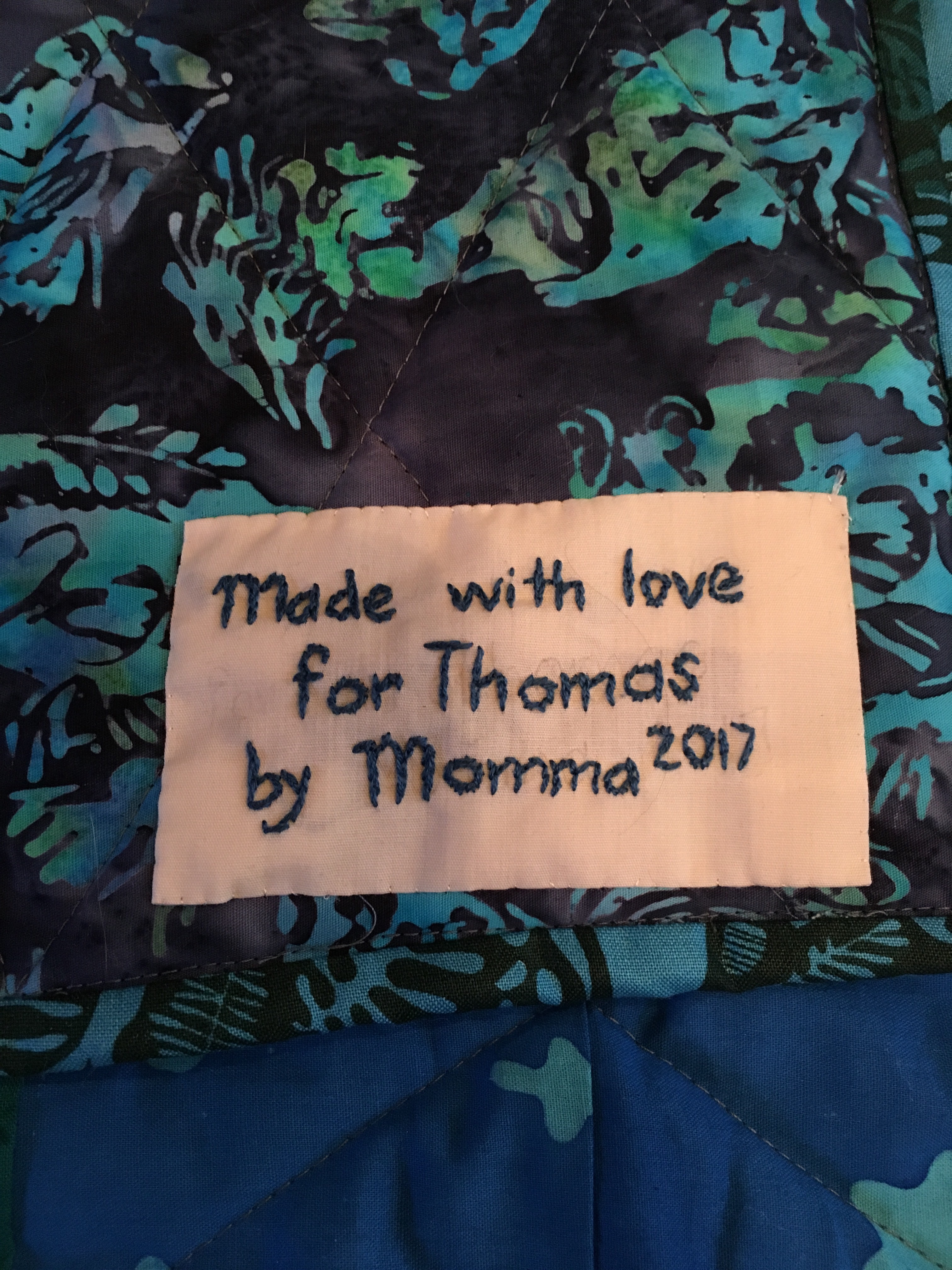 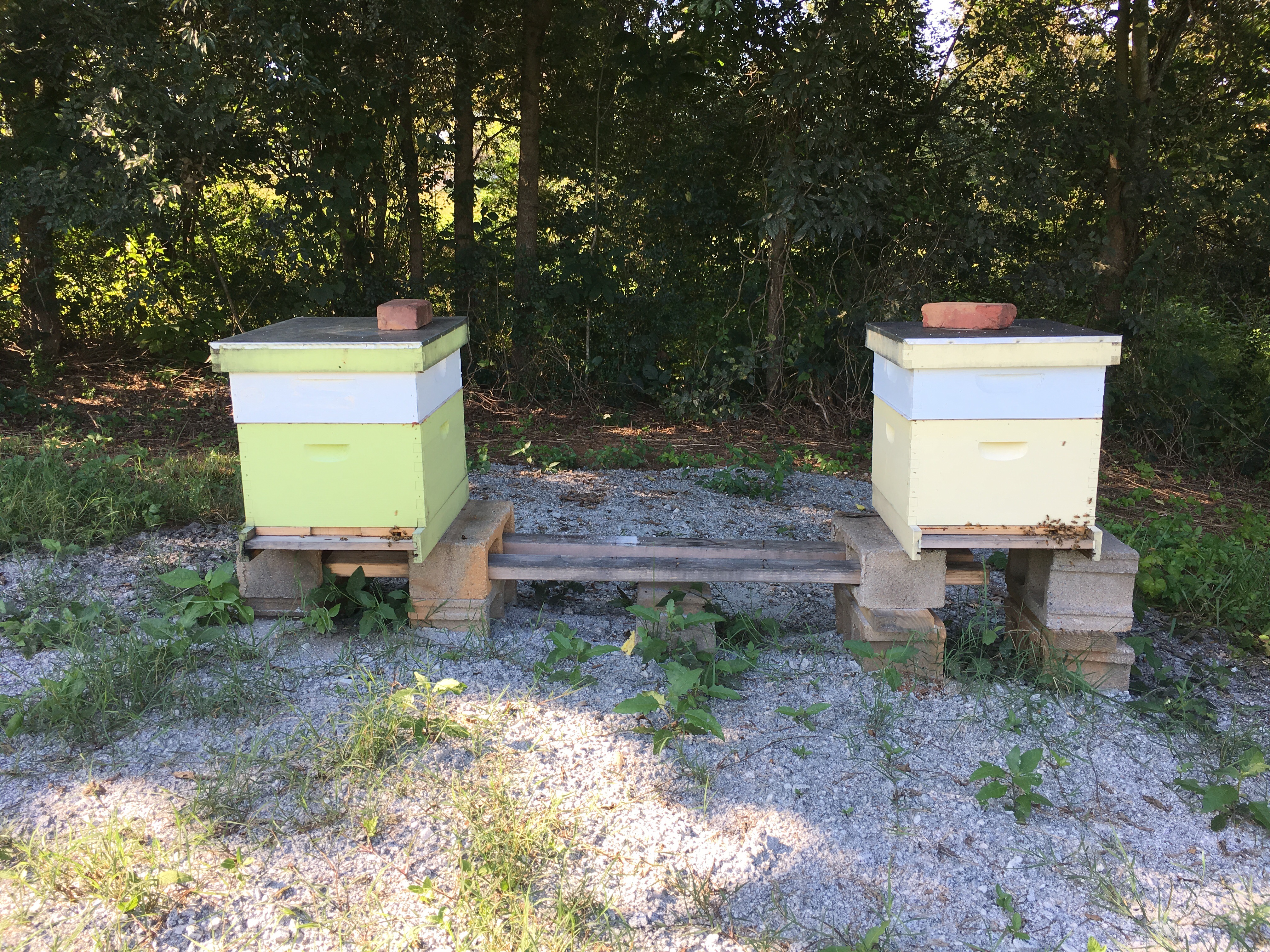 Several weeks ago I opened my boxes to find millions of hive beetles. The small hive beetle is one of the evil destroyers of the honey hive. 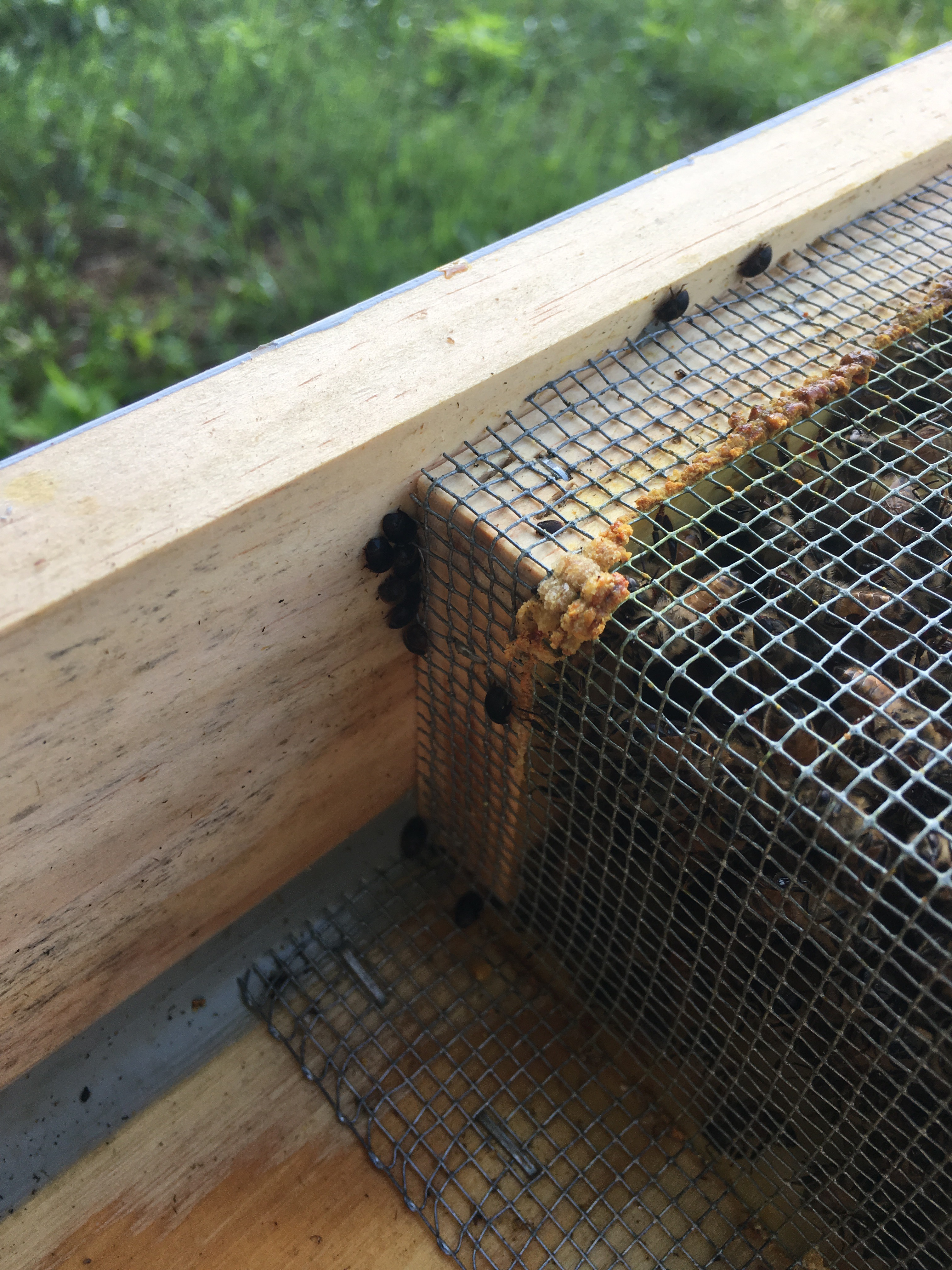 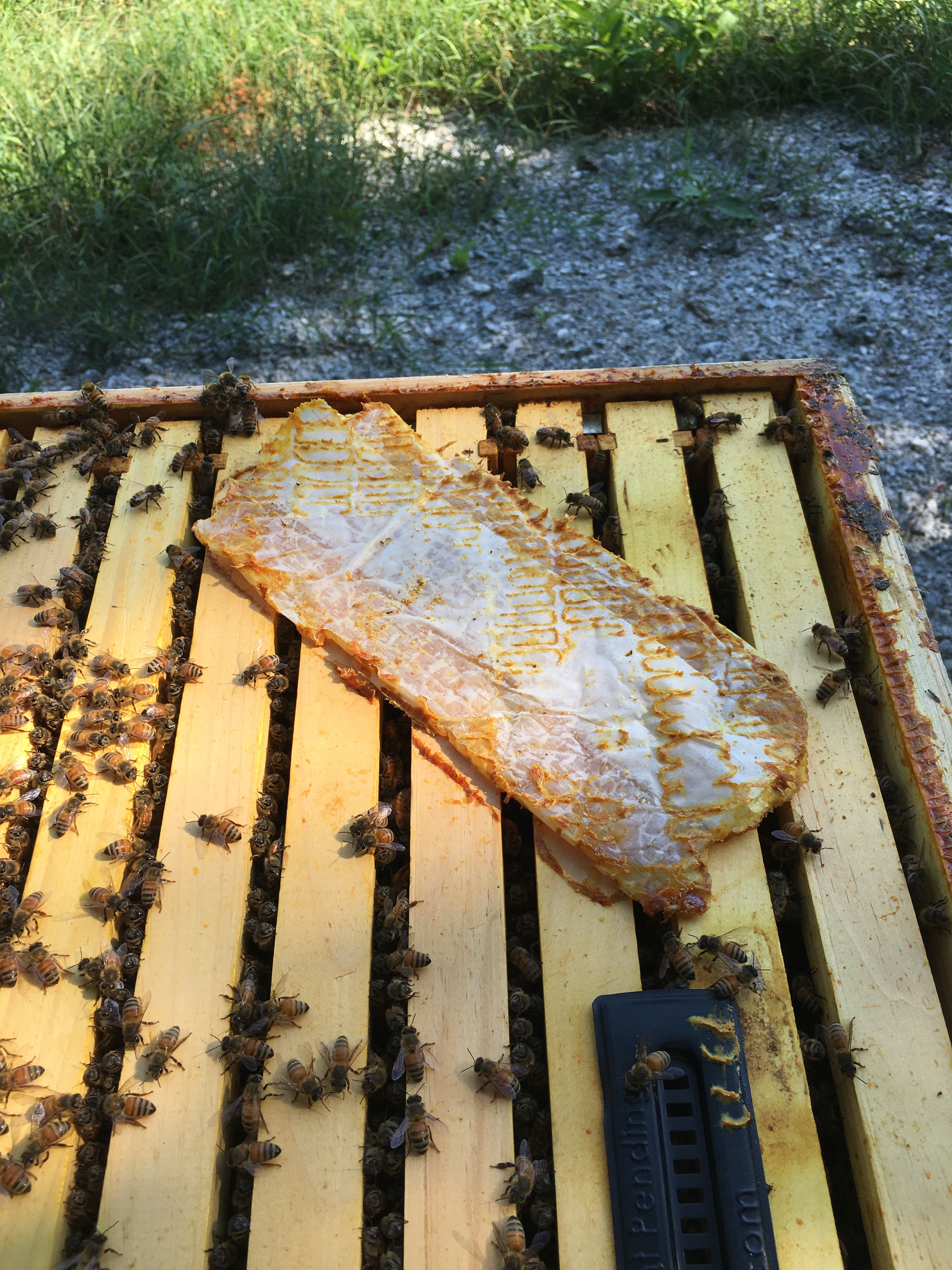 The next thing I needed to worry about is the dreaded varroa mite. Article upon article in the beekeeping community right now is about taking care of the varroa mite. These guys look like tiny red ticks. They seem to love to attach themselves to the bees thorax and lay their eggs in the bee larva cell, which of course kills the larva. Larva grow into bees. Without larva, there are no bees, no hive, no honey. I did two different tests to determine my mite level.

One test involved two jars that are screwed together with a screen in between. I was suppose to gather a cup full of bees, (I totally had no idea how to do this. I guess I should have done some research first.) Then I put the gathered bees into the jar with a few ounces of rubbing alcohol. This would indeed kill those bees, but it was the sacrifice I have to make in order to save a whole hive. I swirled the bees around the alcohol to dislodge any mites that might be present. Then turning the jar contraption upside down, the mites and liquid pours through the screen. Then I would count the number of mites. I had about 4 tiny red mites. The experts all say to not wait until there is a problem, “Bee Proactive!” So I bought “Mite Away” pads.

I made a rookie mistake and opened the package inside the barn. OMG! I about passed out from the fumes. I placed the pad on top of the frames and waited a week. 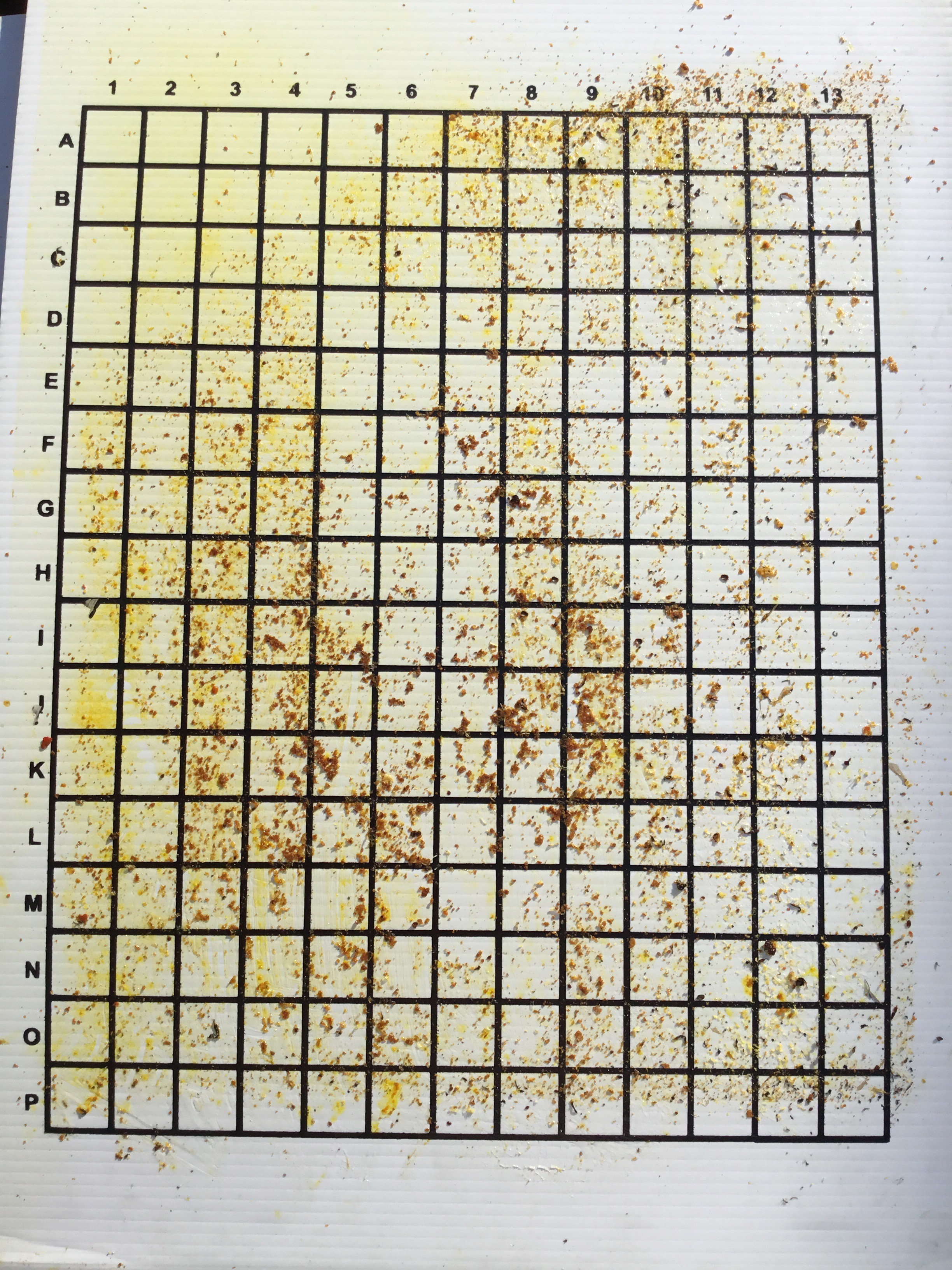 I did another test to see if there were any mites again. This time I place a grid board that is covered in Vaseline under the hive. The idea is that mites will fall down and stick to this board. A week later I pull it out and count the number of mites. Again, I am a complete rookie, but to my untrained eye I saw no mites! Yay!!! I see lots of pollen and bee debris, but no mites. I do a happy dance.in fact, y boxes feel nice and heavy, which tells me they are full of bees and honey. Each box can weigh around 40 lbs when in a healthy state. 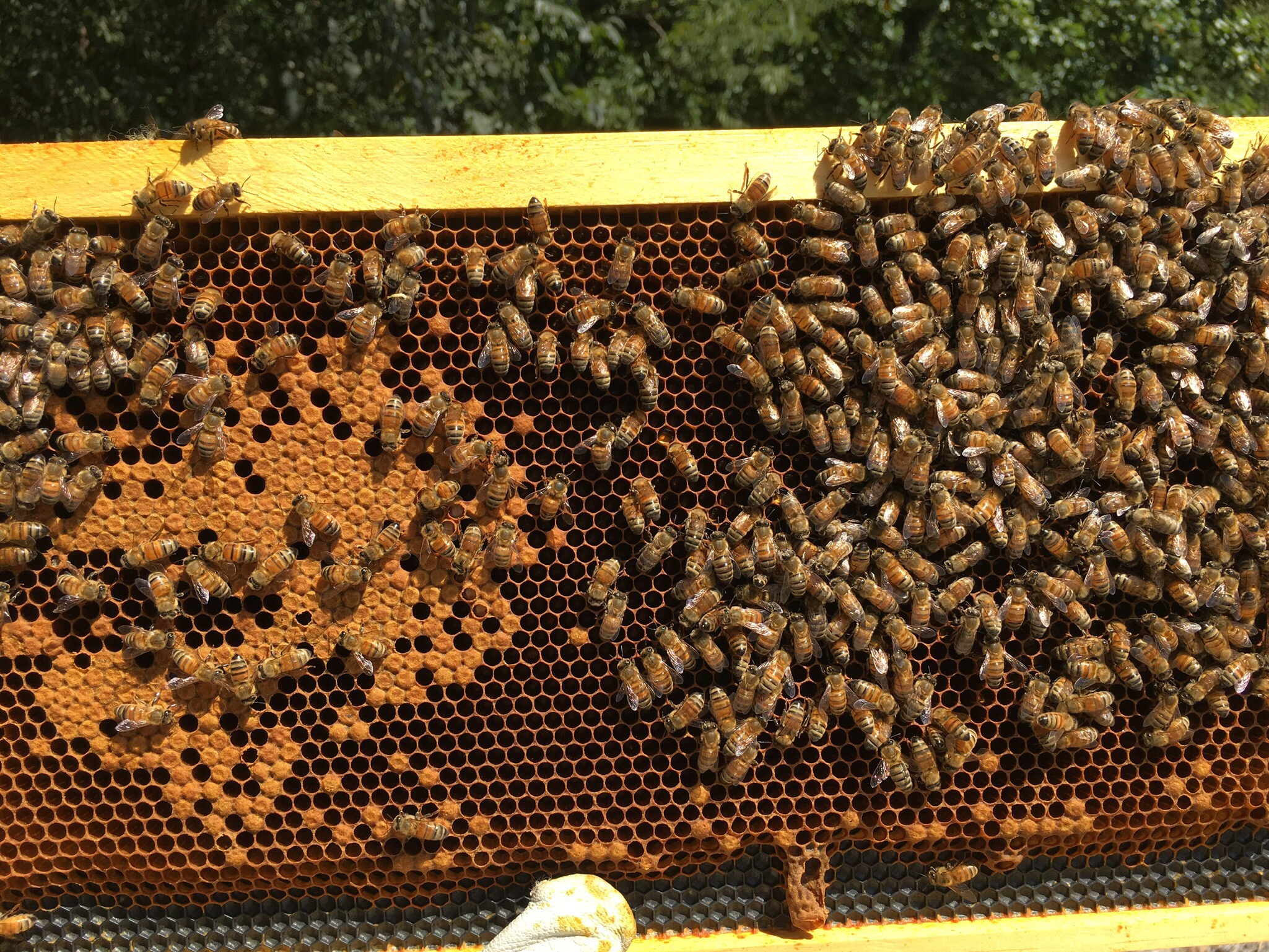 Two weeks go by, I’m thinking my hives are the bees knees

Then I open the green hive and am astounded at how bad it looks. It looks almost empty! What used to be frames of pollen, eggs, larvae, capped cells and loads of happy bees, I now see frame after frame of emptiness. There are a small number of bees buzzing around, but nothing like the sweet hum I had just a few weeks before. I am in a small panic. The yellow hive looks amazing! Everything looks as it should. But the green one is very sad. 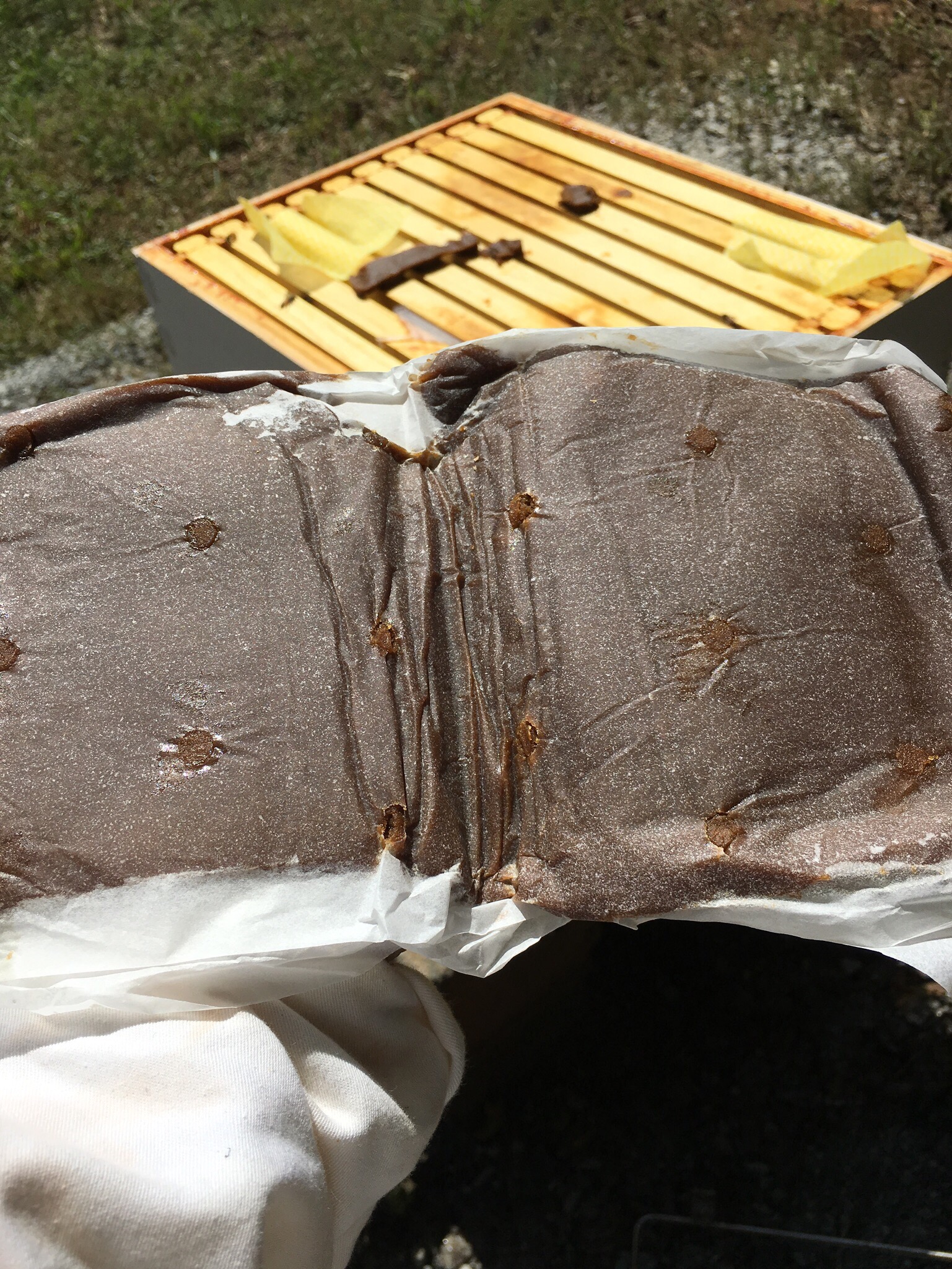 It is the Saturday of Labor Day weekend, so I have to wait until Tuesday to call the bee store for help. I really am worried that I’m going to lose a hive. Finally I get to call Carolina Honey Bee and ask Kelly what I should do. I can’t see a queen, but then I really don’t know what I’m looking at. Am I queenless? Without a queen to lay eggs, there won’t be any bees born. She suggests that since we are in dearth, no nectar flow, that maybe I should add pollen patties to help the bees nutritionally. We decide to try this first, then if I don’t see any improvement, then we can try adding a new queen. 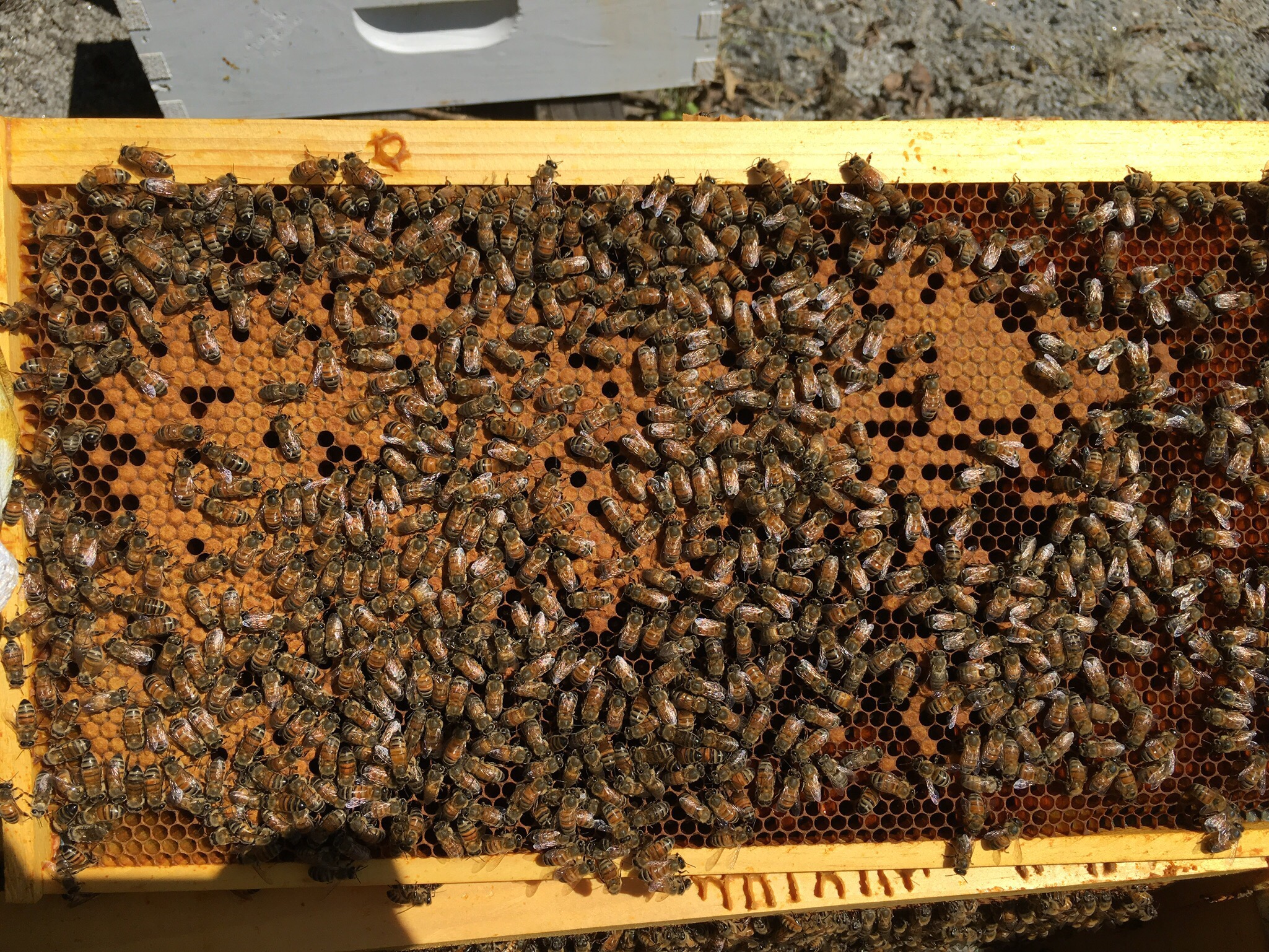 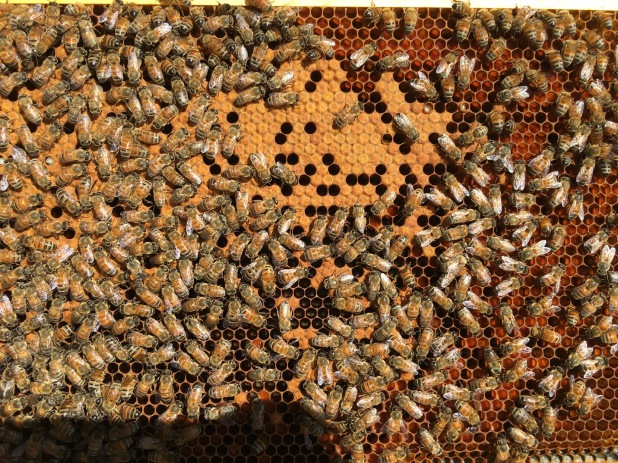 In just 3 days, we’ve got the rainbow effect going on with capped brood and pollen surrounding it. Beautiful! 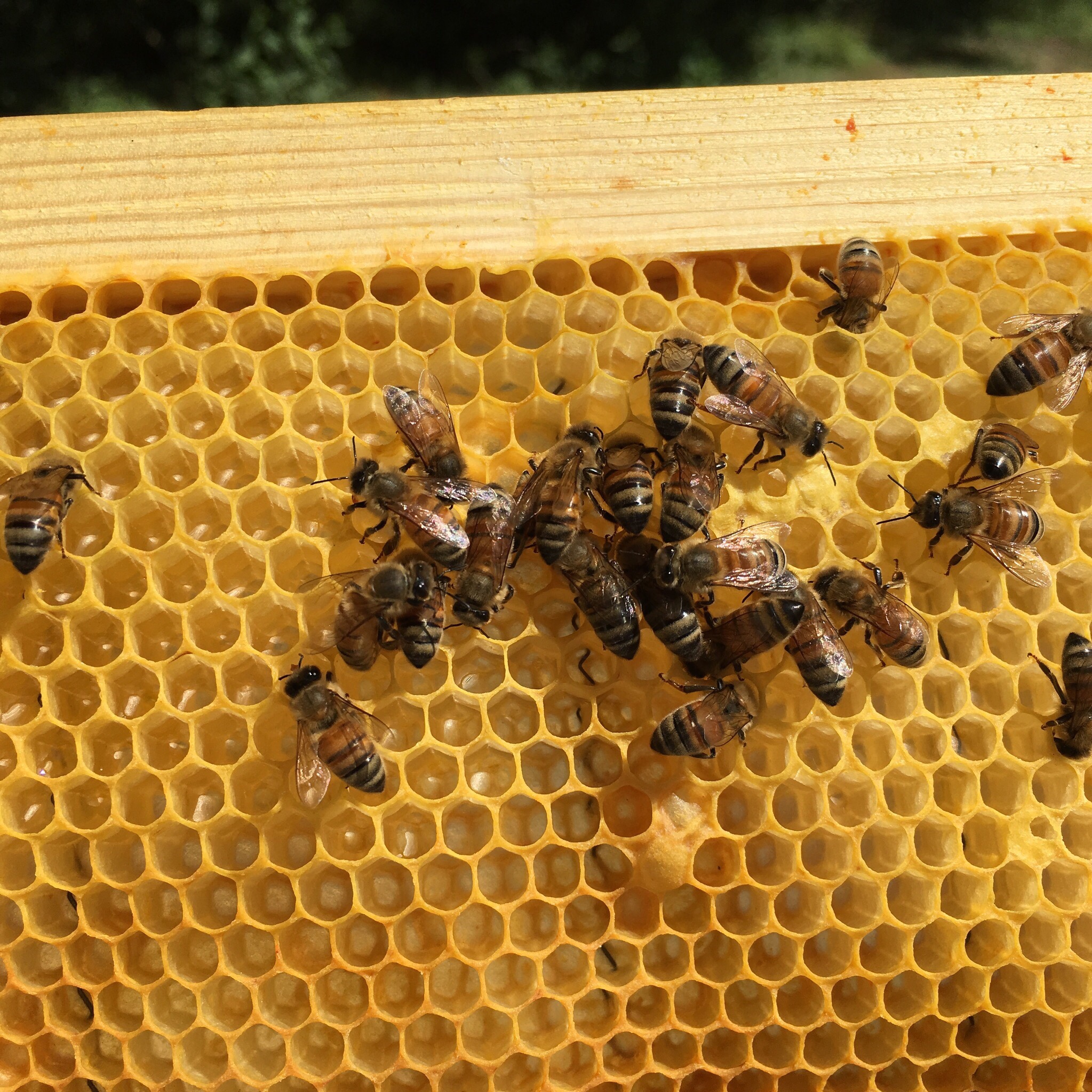 In just a few days, this frame from the top box went from being dry to glistening with honey and the beginnings of capping. The girls have a long way to go to be prepared for winter, but I know they can do it. They have 10 frames front and back that need to be full of capped honey in order for them to survive the winter.

This little peanut shaped cell is a queen cell. This was not here on Tuesday. So if the queen of this hive had become ill or died, the workers would have taken care to raise another queen. 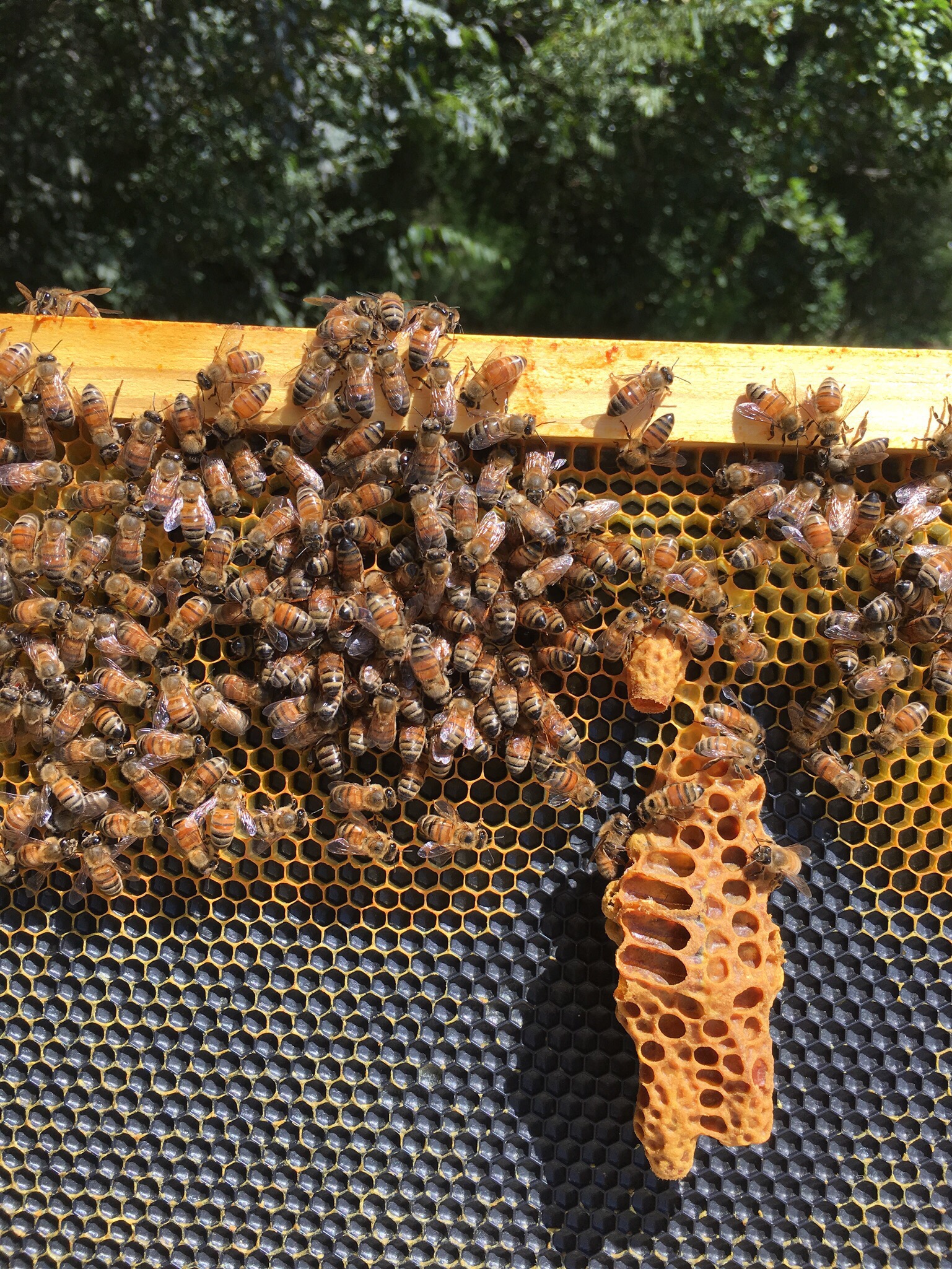 Here is another queen cell or two. The workers decide whether or not a queen is needed. They somehow know and build her a special cell. They feed her gourmet meals fit for a queen of royal jelly. If several of these special cells produce queens the bees will choose the strongest one and kill the rest. Hey, they know what they are doing. 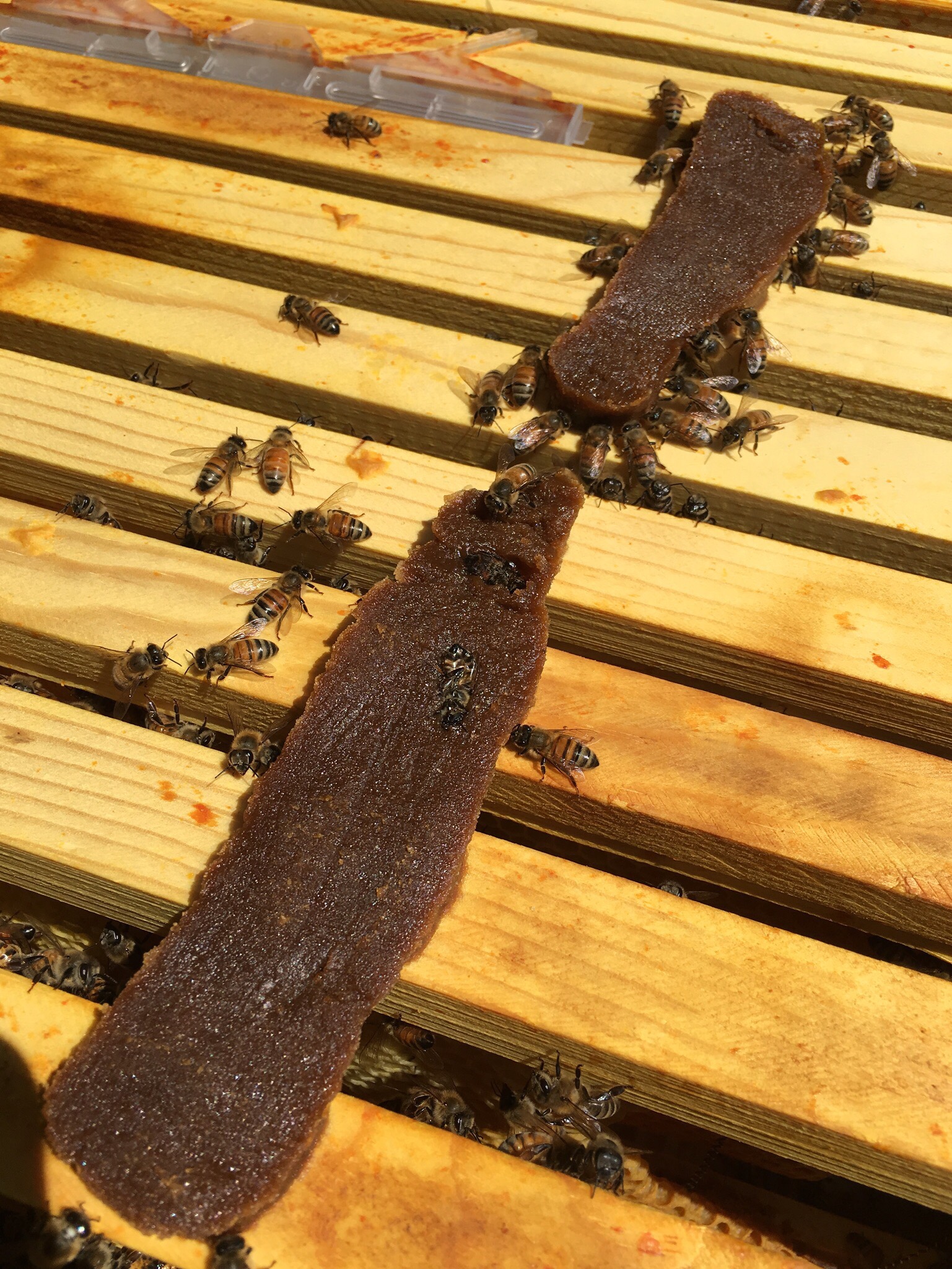 The bees are so thankful for this boost. Check out those two gals who went a bit overboard and gorged themselves to death. Actually I may have squished them on accident when I closed the box up the last time. I think this is what I look like sometimes after gorging myself on some amazing dessert involving chocolate.

Here’s a video I shot of me putting bees from one box to another. I had thought that the bees were doing so great that I could put a box on top, that they would fill with honey for me. I really jumped the gun in this one. So I needed to take each frame and knock those bees back into the established hive. This was done weeks and weeks before I started having all the pest trouble. It’s still kind of cool to see how it is done. 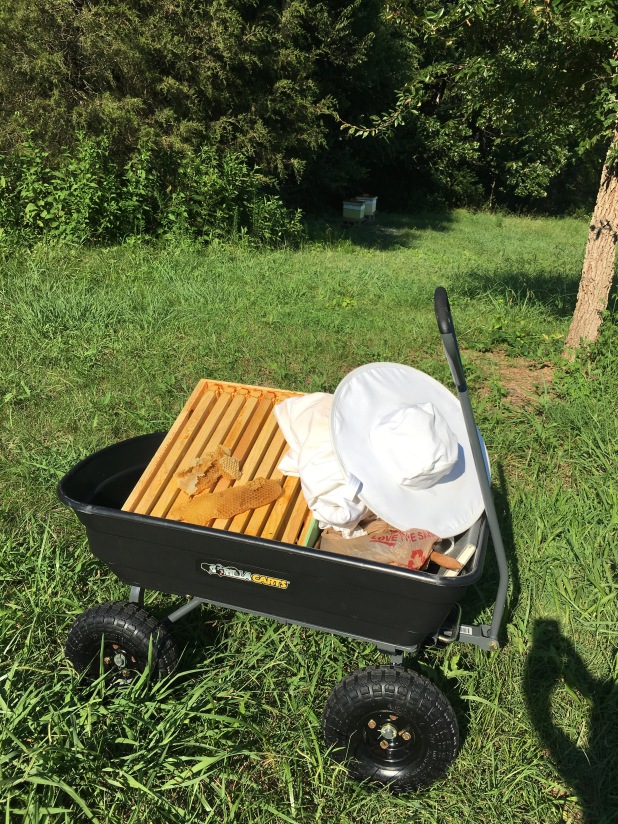 Hey! Check out my new wagon! To walk to and fro from the barn to the hives, I usually have my arms full. This baby has been such a helpful piece of equipment.

There is so much to learn! God made these little critters perfectly. I’m the one who is messing with success by keeping them. I don’t know the reason why bees that are kept are different than honey bees in the wild. I need to do some research. But when I decided to be a beekeeper, I made a commitment to take care of them. There is a fine line in letting them do their God-given thing and helping them thrive. I’m making lots of mistakes, but I’m also learning so much.

Thanks for all of you who are interested in this little adventure I’m on with these buzzing girls.