The last time we met, I left you here. Superman and I had been to Vermont, New York, New Jersey, Philadelphia and Delaware. Next stop is Washington D.C. for a little sightseeing.

We arrived Sunday as the sun was setting. After dropping our bags in the hotel room, we walked a mile or so to see the Capital building glowing in light. No matter what your feelings are about the goings on with the administration, I think we can all agree that this building holds much power and awe. I had chill bumps standing there looking at it from across the reflection pond.

The next morning, Superman and I put our walking shoes on and got out early. Flags were at half staff remembering the victims of the Las Vegas shooting.

Here we were with a thousand other people from all nations, backgrounds, religions, races and different thoughts and ideologies. We were walking freely around our nations capital. There were no heavily armed guards or tanks or threatening warnings….we all walked freely around.

Superman made reservations for a private guided tour of the American Museum of Natural History. Our guide, Glyness, was great! If you ever get a chance to do a private guided tour, Do It! Maybe you are like me, you begin walking through the exhibits reading the placards in front of the items on display and eventually get to the point of just walking by, glancing at the items. Or I really pay attention to uniforms, lockets, dishes, books and other historical artifacts, but I can’t seem to put it all together into one story. Glyness painted that picture for us. She told us stories of the presidents, backgrounds of different situations and fun unknown -to-us little ditties about different situations and people. She allowed us to roam at our own pace and ask questions freely.

After saying goodbye to Glyness, we decided to bomb our gut with a cold hotdog for me and a mystery meat burger for Superman. Yum. We only had one day here, so we had to make the most of it. 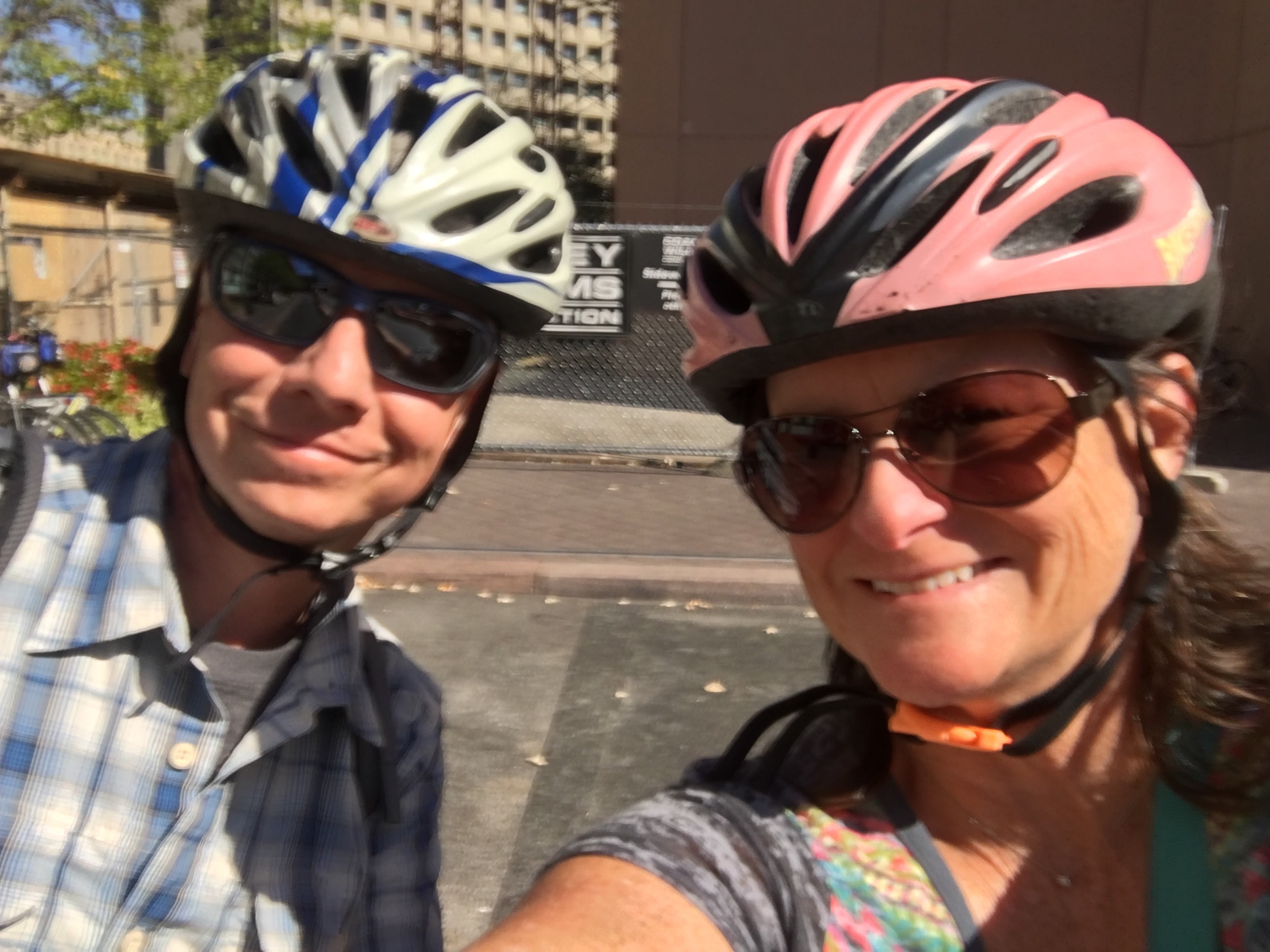 Next on the agenda was a guided bike tour of the national monuments. (Again, I have no idea how to take an unblurry selfie.) It was an absolutely gorgeous day and perfect for a bike ride in the capital city.

We visited Jefferson, Washington and Lincoln. Again, having a guide makes all the difference! He pointed out things you would never know just by walking up to the statue. Did you know that the Washington Memorial is 555 feet high, thus no other memorial or statue can be higher than 555 feet tall?

In 2011, the fourth non president memorial, Dr. Martin Luther King was installed. We approached the memorial through the symbolic mountain of despair to see the stone of hope, Dr. King. Oh, how I wish he could be here now, continuing to lead us with his non-violent philosophy striving for freedom, justice and equality.

Having been born after his death, I have only heard about his “I have a Dream” speech. I wish I had known more of his ideals and vision. I was truly touched by the excerpts from some of his speeches that were engraved on the walls behind him. 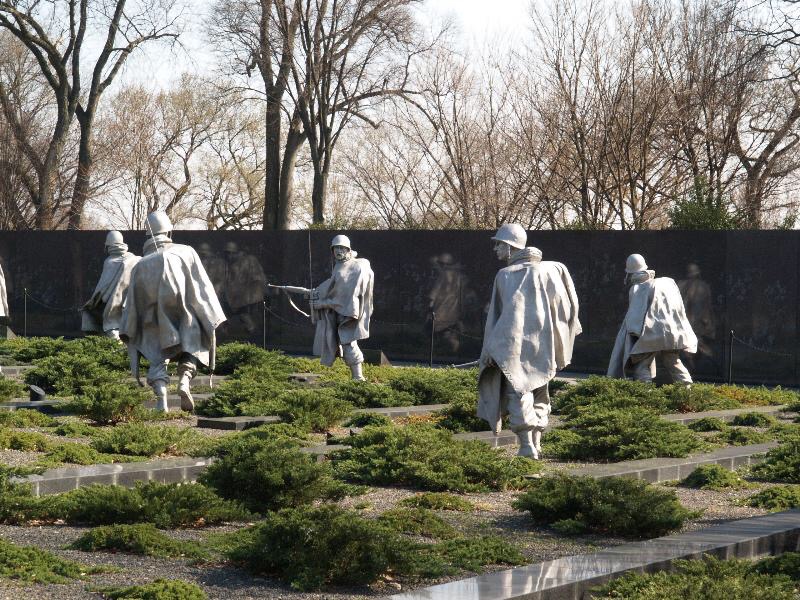 We visited the war memorials…World War l, Vietnam, Korean, World War ll. Again, having a guide there to tell you about the symbolism of each memorial was so enriching. For example, in the picture above, the Korean War Memorial, I learned so much more with our guide. The low growing bushes and reflective stone represents the rice patties the soldiers had to walk through. No matter where you are standing at this memorial, a soldier is looking at you. The number 38 has much meaning to this war. It was fought at the 38th parallel for 38 months. Because of limitation of space, there are only 19 statues in the garden, but on a sunny day, 19 more are reflected in the granite wall, thus bringing the number to 38. I think this is so cool!

We found our state of SC in the WWll memorial. (Please don’t be offended by our smiles at this memorial. We are so thankful and feel so blessed to live in this nation of ours. Because of the men and women who have fought and died for this country, we have our freedom.) 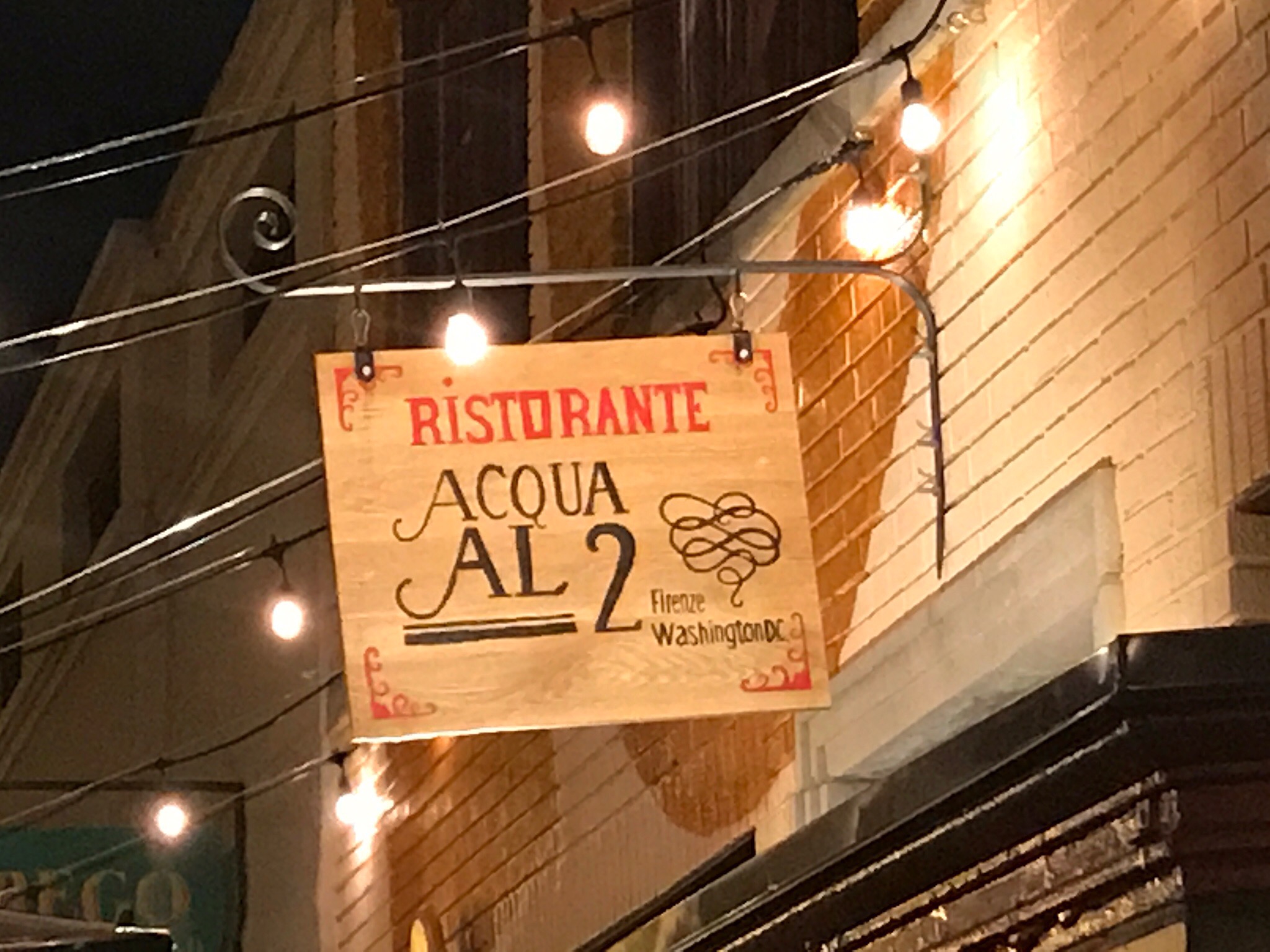 Our beautiful day ended with an amazing dinner at Acqua Al 2. It is located in the sweet east district. The hostess led us to our table for two. As in many fine restaurants, the tables are situated very close together. We sat down and I noticed one of the gentlemen at the table beside ours, using his hand to shield his face. Now…..I may not be completely politically knowledgeable, but I’m not an idiot either. We are in Washington DC. If you have grey hair and are wearing a suit and trying to hide behind your hand, I’m going to make the educated guess that you are a senator. Guess what?!? I don’t care! 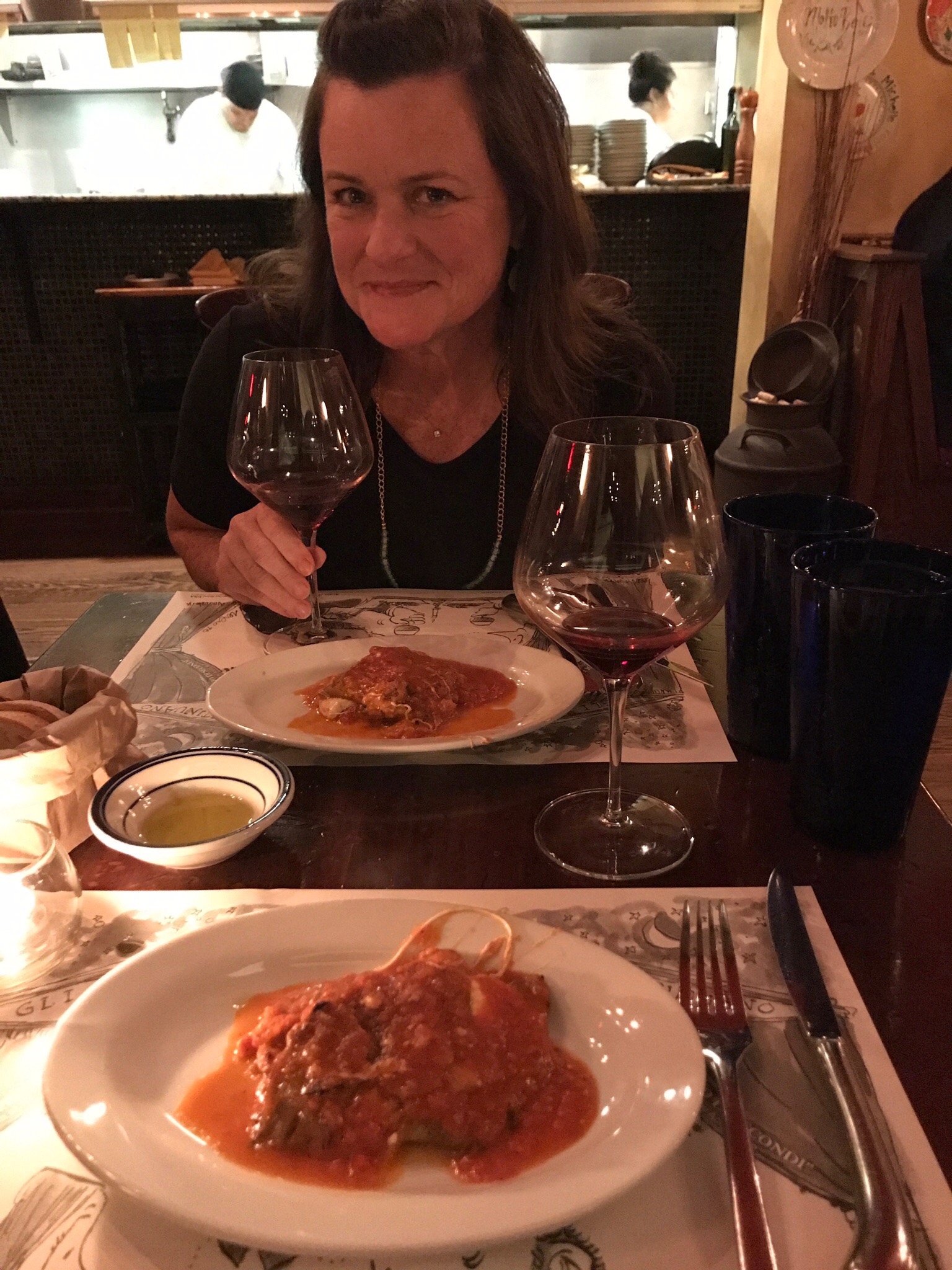 I’m here to eat some amazing Italian food, like this appetizer, (YES! Just an appetizer!), rolled Eggplant Parmesan. Now this meal was originally to be about delicious food, a great glass of wine and romantic conversation with the hubs.

My husband is a HUGE t.v. news/talk radio junkie. The guy majored in political science in college, the Military School of SC, The Citadel. He interned in Washington for a couple of months. He’s a card carrying member of a political party. The guy loves to bike, hike and argue politics.

So, as I enjoyed my appetizer and wine, Superman asks if I had seen the text he had just sent me. Huh?!? Me: Remember, I’m right here 16 inches away from you. A text?

He is freaking out because the guy and his wife who just sat down with “hand-over-his-face” guy is Chris Dodd, who was a senator for 30 years, now president of the motion picture association. Then comes along Robert Kennedy’s senator grandson. People are coming by the table back slapping and shaking hands. A few minutes later, Former Speaker of the House, Nancy Pelosi, pulls up a seat at the end of the table. Superman’s phone is pinging and buzzing back and forth with all of his peeps.

I asked our waiter for another glass of wine. 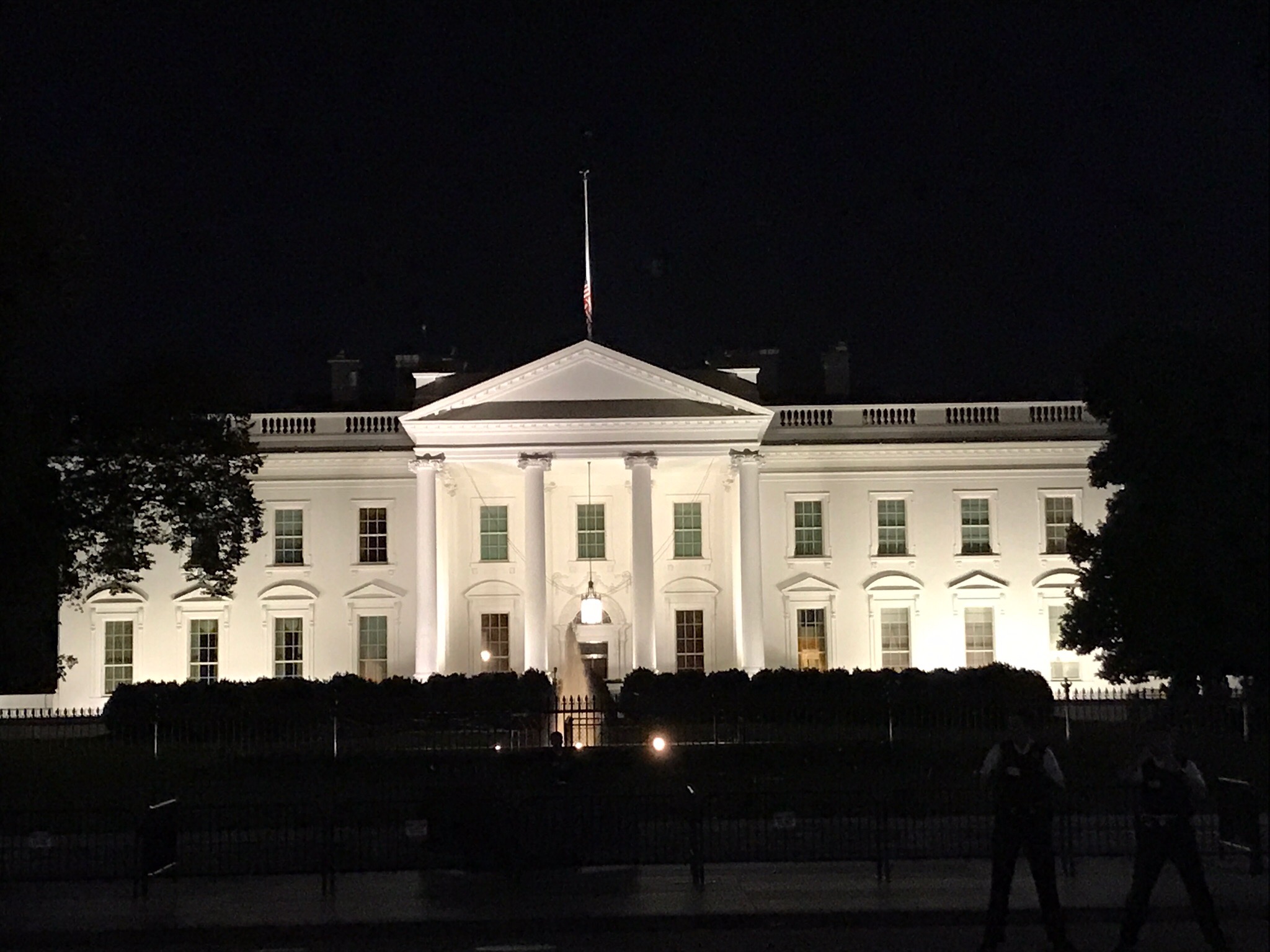 We paid our bill, walked past Mrs. Pelosi’s bodyguard and got into a cab which idled beside her big ol’ black SUV. Our driver dropped us off here…America’s White House. Isn’t she beautiful?

The last two days were spent going back in time, learning more about this country’s history. Listening to the National Park Ranger tell us about the differences of opinion the founding fathers had in Philadelphia, visiting the monuments of Washington, Lincoln and Dr. Martin Luther King and then being there listening to the conversation of the folks sitting beside me at dinner, I realize that as much as we have changed as a nation, there is so much that has stayed the same. No matter which side of the aisle you sit, I truly believe we all have the same goal to uphold the goals and values of Washington, Jefferson and Madison…to have a country where we have the freedom of worship, respect and dignity of life, and opportunity to pursue happiness. We differ in the way we as a nation should go about this. This always will be.

I love this country that I call home.